THE FATE OF THE FURIOUS-REVIEW 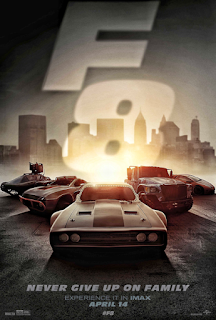 This is the first movie I've seen of this franchise, no for real. 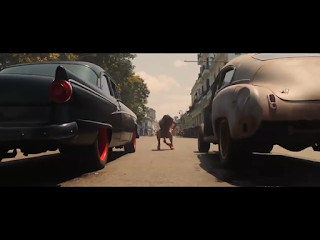 As far as I'm concerned, The Fast and The Furious franchise, is that one franchise built around street racing and hot chicks dancing around the track, that's not to say these movies are bad (again, this is my first) but that they've become so beloved has caught me off guard. So, what are my thoughts after watching The Fate of The Furious? This franchise, is pretty over the top stupid isn't it? I mean, not in any bad way, but wow, this takes its bizarre plot seriously, it's admirable honestly. My assessment of the franchise is only wrong in that these movies include action sequences along with those street racing and hot chick elements as the foundation of the franchise, so that's nice I suppose? Again, this just feels bizarre, it's like a joke everyone committed to, I'm surprisingly okay with that. 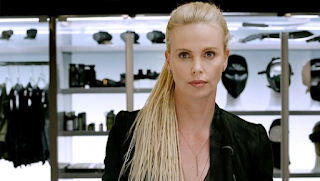 This time around, Vin Diesel's Dom is forced to work for an evil hacker played by Charlize Theron, a move that forces him to leave his "family"'behind, seemingly betraying them. Despite having not seen this franchise before, I knew that Dom's "family" was a big deal for him, so I got why this was treated as such big deal. It's an interesting premise to build one of these movies around, but it is a double-edged sword, in that we never actually see Dom struggle with the idea of betrayal much, largely because he hardly interacts with his "family" in this adventure, so good idea, but bad choice to keep him away from characters he can bounce off of. Still, seeing Dom act like a sad puppy as he's forced to steal stuff, along with just being evil is fun enough for a distraction. 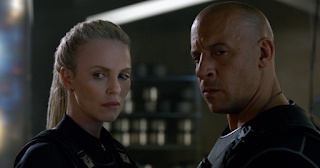 There's an almost laughable attempt to convince us, as well as Dom's "family", that he's evil. Granted, it's funnier to us, because we know he's not, so that the film tries acting like he is felt odd, but amusing. A huge chunk of the film has Michelle Rodriguez trying to convince everyone that Dom isn't evil, which is funny, because looking at her scenes alone, suggest she believes he's brainwashed, yet no one ever considers that, they just say he's gone rogue. Normally I'd be bothered by that, but everyone onboard takes this with such a straight face, it becomes admirable.

The most fun interactions come from Jason Statham and Dwayne Johnson, a pair of action heroes who are probably too good for this franchise. I don't mean to knock this franchise mind you, it's just, if anyone on here feels genuinely good, and not just good enough for the material on hand, it's these two. Jason Statham even goes on to have the best scene in the film, I won't spoil it, but it felt like Statham is covering the "obligatory" kid film action stars tend to have in this one scene. The Rock meanwhile is at his best when he just uses his own strength. 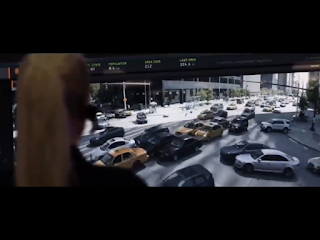 The main hook to this movie's plot involves all the cyber terrorist stuff, which reaches max insanity when the concept of zombie cars is introduced. You read that right, ZOMBIE CARS. A lot of the marketing has given away this epic scene, but trust me, if you can avoid it, please do so. Sure, there's other insane stuff here (speaking of stuff the trailers gave away, avoid any footage of The Rock with a torpedo) but somehow, I feel zombie cars is as silly as this franchise has gone, I have to give the cast some credit for being able to do all this without winking at us. 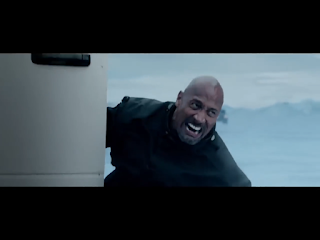 I could go on, but I think I've made my point, The Fate of The Furious is incredibly silly, but incredibly fun as well. As an entrance to the franchise, I found myself liking it more than I expected, it's not high art, but it's a fun action film with fun car stunts, watch it if you're a fan, or if you just need mindless entertainment every once in a while.