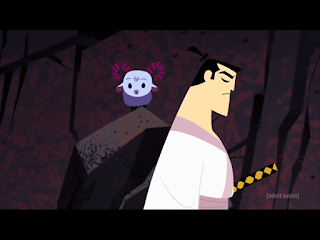 IT'S HERE! Jack's sword is back! Well, first we get a flashback.


The first episode this season gave us an idea of how Jack lost his sword, but now we get the full picture, in what is a predictable, yet sad sequence. We see Jack, in his traditional wardrobe, walking up a mountain, as a trio of adorable goats follow him, standard stuff for the previous seasons, in fact Jack even finds a time portal, with Aku ready for battle. Unsurprisingly, Aku, destroys this portal, but reveals a new wrinkle, this was the last time portal. Jack gives in to his rage, attacking a trio of newly created monsters by Aku (you can guess the twist here), Jack kills them, but loses his sword shortly after. It's an emotional scene, even if you know where it's going, but it does feel rushed, in fact, Jack losing his sword shortly after Aku faced him feels odd because of how rushed it is, did Aku not bother waiting to see what happened? I'm nitpicking of course, but it just feels odd given everything.

Back to our main story, Jack goes back to the spot where he lost his sword, Ashi is along for the journey, until Jack explains he can only go as it is a spiritual journey. As Jack meditates to get his mind where he needs to go, Ashi stands guard. Leading to the bulk of the episode, Ashi protects Jack from an army, it's easily one of the most badass moments of the entire show. If Ashi wasn't already among your favorite characters in this show, seeing her take on an army will make you love her so much, it's incredible, she's easily risen to the top of my favorite Cartoon Network heroines with this episode alone.

Just when the army has been taken down, we notice a mysterious figure is nearing Jack, Ashi goes back to find it's her master, the High Priestess who worshipped Aku. The fight feels brief, but it's still an awesome one. I like that the High Priestess even acknowledges Ashi as the strongest of her sisters, because she then acknowledges that that's what made her dangerous, Ashi was strong, which made her the most likely candidate to question Aku and her teachings. I loved every second of this fight, even if I do wish it had gone a bit longer.

As this all goes on, we see Jack making tea for an old Monk, it's a nice quiet scene, that leads to Jack realizing what he's been doing wrong all along. After the Monk acknowledges that Jack lacks balance,  Jack's inner self begins to rage out, but Jack wants peace, tired of the arguments within, Jack begins to understand why he can't find his sword. Once again, much like the rest of the episode, it's a great scene, it's just rushed, which sums the episode up, it's great, but it all ends up being rushed. Still I really dug it, and now we find Jack marching to the epic finale, I hope it feels right. 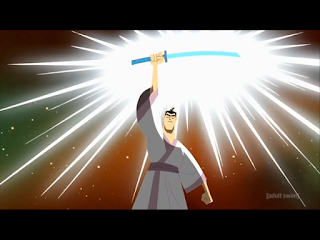