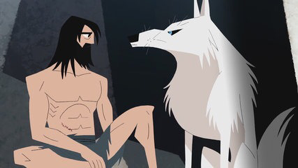 Samurai Jack gets even bloodier in its latest episode.


So this episode begins shortly after the events of the last episode, Jack is bleeding as he drifts through the river, while the Daughters of Aku continue their hunt for our hero. Eventually Jack awakens and finds cover, only to be greeted by the lead of the last episode's subplot, yes the white wolf actually plays a role in Jack's journey here. The stylization is top notch in their encounter, we see Jack and the wolf drenched in blood, both in the dark,it's a stunning image that stayed in mind even after the episode ended.

The partnership between the two loners is then mirrored by the Daughters, they may be a team, but they do not support their fallen comrade. There's a nice, though not especially deep, contrast here, we've followed a lone hero for quite some time, but Jack still welcomes help, even returning the favor for his new friend, meanwhile our foes here have known each other since birth, but aren't exactly ready to lend a hand. It's understandable though, these girls were raised to be killers, in fact we are even reminded that these girls do not understand the real world as they stare confused at nature.

Back to Jack and the wolf, as they both relax and restore themselves, Jack once again encounters visions of himself. Along with arguing with himself (which just seems to keep highlighting what may end up being a depressing end for our hero) Jack remembers a moment of his childhood, a touching memory, until his father has a rough encounter in it. Adding that Jack has seen murder before in his life is a good touch, especially if you were led to believe that last week was his first encounter with it.

The episode reaches its peak once the Daughters of Aku catch up to Jack. In true fashion to the noble hero he is, Jack offers a warning, the Daughters refuse to take it, resulting in a beautiful fight wherein Jack even murders a few of the Daughters, which admittedly is my nitpick this time. While I certainly understood why Jack is willing to murder these girls, it does feel off when compared to his reaction to the first girl's death at his hands, maybe a better showcase that he no longer cared was needed, but it never felt right that he'd kill so easily. That being said, it's still a great fight scene and perhaps there was no better way to make the group smaller.

Once more, this was a great episode for Samurai Jack, I'm not a hundred percent sure where it's all headed, but I'm sure we'll see somewhat of a redemption with one of the Daughters, if you've seen these episodes I'm sure you'll know which one. If you've yet to see any episodes this season, I must ask, what are you waiting for? 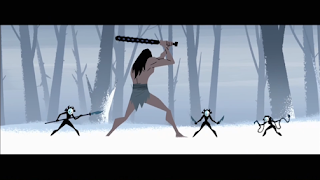