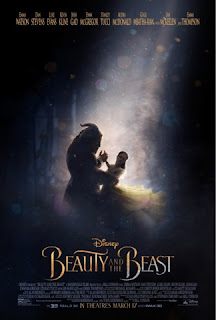 Well, it's not the most forgettable remake, so it's okay? 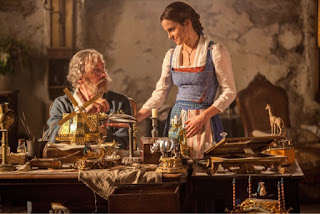 So, Disney remakes, can't say I love them (excluding The Jungle Book and Pete's Dragon) but I can say I like most of them which holds true for Beauty & The Beast. I like it sure, but it's best compared to Cinderella (2015) as to why it doesn't work completely, mainly, it can't decide between doing its own thing or reenacting classic moments. The stuff that's new works for the most part(Gaston starts off more sympathetic, LeFou is given more of a character, Belle is a bit more handy with inventions) but it gets bogged down by forced reenactments of the animated classic (the reprisal of "Belle", Gaston's marriage proposal, the asylum threat) that make less sense with the new material. At one point, for example, Belle's father steals a rose from the Beast, which lands him in the Beast's dungeon, which is fine, except they play out (essentially) the scene from the animated film, which slows the film down a bit, why play up the scene if you're doing a different thing? The movie is guilty of that in plenty scenes. It shouldn't surprise me, after all, the trailers made it clear that this would be reenacting quite a bit, but I will admit the new stuff was welcomed for the most part.

Oddly enough, the characters that suffer the most in this remake, are the leads, though mostly Beast. Emma Watson isn't a bad choice as Belle, but her lack of singing skills is noticeable; if that were her only weakness I might've forgiven her, but the film makes her a bit rude early on. In the original (yes, I mean the animated Disney ones, don't bring up other versions), her reluctance to Gaston is justified, here, her refusals can be a tad mean-spirited, yes, she should say no if she's not interested, but Gaston is presented more like a sad puppy to her (at first), making her rejections a bit too harsh (particularly "I can't change you, no one can change that much") and feel unaddressed, though they should've been.

It's the Beast who suffers more, in more ways than one. For starters, Dan Stevens is a fine choice for the Beast, yes, but he's made too cruel early on. Remember how the animated one had the Beast consider Belle as a solution right away? That's thrown out, in fact, key scenes are done again, but with a crueler Beast, thus making Belle's blossoming love for him, feel off here. I will admit to liking that the Beast is more knowledgeable in literature here, but that should've been introduced earlier, it would've made for a stronger connection. Lost in the transition to live-action is the very expressive facial features of the Beast, which was a huge part of making him likable, losing that, I just couldn't like the character as much. Add in a lousy "daddy issues" reason for his cruel personality, and you can see why the Beast is given the biggest downgrade. 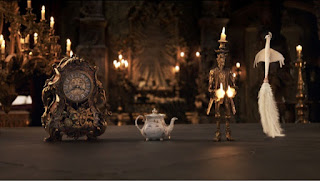 Speaking of expressive facial features, yes the Beast's assistants aren't well designed here. I admire the attempt to make everything based on the Baroque style, but it's hard to fully grasp the reactions of many characters here, especially Lumiere, which matters because the film gives these characters their own dilemma (if the Rose is gone, they lose sentience), so if we can't gauge with them emotionally, how can we care? I'd say Mrs. Potts fares best here, but her design feels too lazy, in fact, it's the minor characters like the Wardrobe and Piano (not seen above) who feel the most well designed. As characters, though? they're fine, I don't think any of them outshine their animated counterparts (in both voice or personality) but they're fine, my favorite being Ian McKellen as Cogsworth. I just think better designs would've helped them. 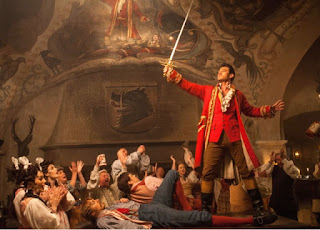 The main reason to watch this, though? Much like the animated film, Gaston, here played by Luke Evans. I'll admit, I wasn't sure what Evans could offer (my choice for Gaston would be Channing Tatum) but he works, he's a different character overall, but for this film's take? I dug him, he was sympathetic, but the progression to evil was definitely a welcomed change. My only real complaint is that he could be out of character, especially early on where the narcissistic side feels a bit at odds with his new traits. Outside of that, Evans is a blast, especially whenever Josh Gad's LeFou is on screen.

Speaking of LeFou, let's address that controversy, it's overblown. Yes, LeFou is clearly gay here, but it's not explicitly stated, nor does the film make much of it, can we all drop this? By the way, if LeFou being gay is an issue to you? You're wrong, please catch up with the rest of the world, get out of your little bubble, gay people exist, shut up. Outside of that, I loved LeFou here, he's far more interesting in this version, I would've much preferred he and Gaston lead the film, they'd make a better film if I'm honest. 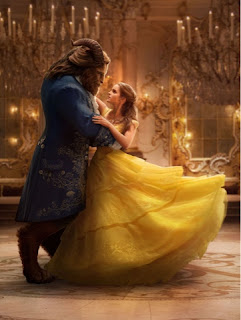 The main angle here seems to be "what if Beauty & The Beast were a live-action musical, in the same vein as other classic live-action musicals?" A fine choice, I just wish the new songs were better (they're fine, but are weaker than the classic songs, which are sung okay enough), that way this could've stood out more. What also could've made this better? I would've made the whole village white, except for Belle, everyone treats her weird because she's "different" but we don't see much reason in the logic, one minute it seems because she's not in a traditional gender role, the next we see the town's women also breaking from said roles (for example, we see women join in on the battle against the Beast's castle) so why not make Belle the only black or hispanic girl in town? At least then there's more weight to people's reactions to her. This all being said, I think the changes helped, just wish they had more confidence in them, instead we get a film that wants to stand out but also pander to fans of the original.

As far as remakes go, you can do a whole lot worse. It's not the worst from Disney (Alice in Wonderland) It's not the most forgettable (Cinderella), it's just okay. I wasn't the biggest fan of the original, I'm less of a fan of this one, but I can safely say Beauty & The Beast is fine to watch at least once, but expect to return to the animated one soon.