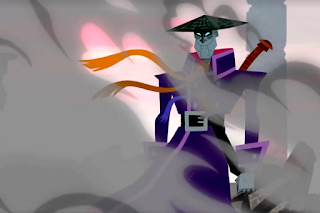 SAMURAI JACK IS BACK BABY, AND I'M REVIEWING ALL THE NEW EPISODES!


I've seen plenty of things from my childhood, I honestly never thought this would be one of them, but Jack is here, a little different then we might remember, but the core is still the same. In case you've forgotten, Samurai Jack, was about a wandering samurai trapped in the future, his sole mission was to get back to the past and defeat Aku, an all powerful demon, before Aku's power could take hold all across the land. This is still that show, but time has jumped fifty years ahead, Jack no longer carries his magic sword, Jack no longer ages, Jack is no longer his noble self and finally, Samurai Jack is a more violent show, airing specifically for adults in this fifth and final season. I'm honestly amazed that it's come back in such a perfect way.

As this episode begins, we're given a set up that feels perfectly at home with the original four seasons, villagers are threatened by Aku's robot minions, while Jack comes to save the day, only he is using more violent methods we see, after all, he no longer carries his sword. This is not the same man, at least in personality, Jack is still out to defeat Aku, but he no longer seems to actually be focused on that mission, at least, that's what the visions he seems to have out of guilt suggest. Meanwhile, since we last saw Jack, it appears that Aku has gained followers (wouldn't it be funny if that episode where Aku read stories to some children actually converted some of them?) who worship him to the point of bringing women to the world, just to serve Aku by killing Jack. The two stories don't cross in this episode, but they're both entertaining and let viewers absorb the idea of this being more mature incredibly well, when you first see human blood, you will be shocked, but you will be able to accept that this is happening in a former "kids" show.

Much like the original run, this still packs plenty of humor amidst the serious story, though this is primarily once Jack meets Scaramouche, a robot bounty hunter, with a musical talent, which is probably my favorite thing in this episode. Tom Kenny is awesome as Scaramouche, sure he might not have much in the way of screentime, but there's so much personality to this character, honestly, I'm sad we won't see more of this character because he was so fun, but that's standard for this show, the characters were memorable even if they were just one-off villains.

Speaking of villains, Aku is absent, with his voice barely being heard this time. I'll get to what I think of Gregg Baldwin in the role next time, but suffice to say, I do miss Mako, it's a shame he couldn't live long enough to see this to the end.

By the looks of things though, it wouldn't surprise me if he takes a much smaller role this season, the Daughters of Aku (who provide most of the adult level violence here) seem to be our main focus. Of course that could all change as we get more episodes, the observations here do suggest less focus on Aku, and more focus on Jack's guilt over his failures, culminating to (possibly) feeling like he's actually made everything worse in his travels. I'm not sure how this will go down, but if this first episode is any indication, prepare to cry by the end, we're likely getting a depressing ending, even if Jack wins.

Samurai Jack returned strong, it's been too long, but I'm glad that we're finally being given an ending to one of the greatest animated shows ever made, I'm glad to have you back, Jack. 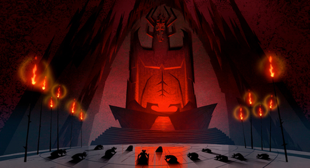