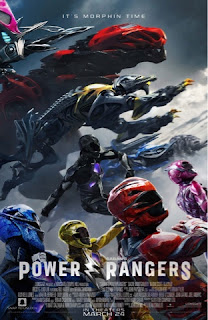 *NOTE* This review is based upon a test screening I attended, some things may have changed since then, but I feel it's still probably the same movie overall, so I'm presenting you my thoughts on what I saw. I will update on this, if any significant changes are made in the final product. 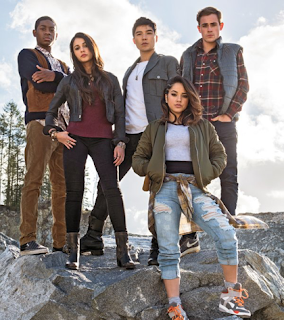 Being realistic, yes, Power Rangers is a big part of my childhood, not the best part, or a favorite, but it was something I watched a lot at a young age, in fact, I was so young that I honestly thought they were real (when you were three, you probably thought your heroes were real too okay?). I bring this all up because I can safely say this new movie doesn't exactly bring me back to that, it's certainly not awful, but by the end I felt exactly the same way as I do now about the show I watched all those years ago, it's strictly for kids. Part of the reason why I wasn't exactly asking for a Power Rangers movie, is the grim realization of something I've known for a few years now, I'm too old for it. The Power Rangers weren't anything deep, unique or incredibly well-written, the action was cool, but not cool enough to make it ascend its status as a kids show. Batman the Animated Series is better as an adult, Samurai Jack is better as an adult, Animaniacs is better as an adult, but Power Rangers? It's not even as good as it was in my childhood, it's just bad, not because it's cheesy mind you, but because it's boring. 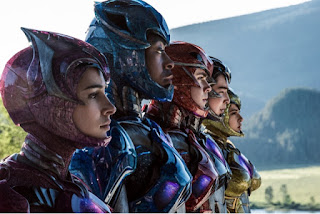 As said before, this new movie isn't awful, not by a long shot, at worst it's generic, at best it's decent, but I imagine kids will probably get the most out of it, while some adults will love it just because of nostalgia. I have little against people loving this for nostalgia purposes, after all my favorite scene in the film is purely a nostalgic moment, but I can't help but feel like it's a fairly shallow reason to love this. There really isn't much here that it gets wrong in all fairness, we have teens with attitude, we have a campy villain (Elizabeth Banks is great by the way), bad stuff happens, the teens fight foot soldiers, ride in robot dinosaurs and it all culminates to a monster fight in their giant Megazord, it's exactly like the show, but with some gritty redesigns that aren't interesting. 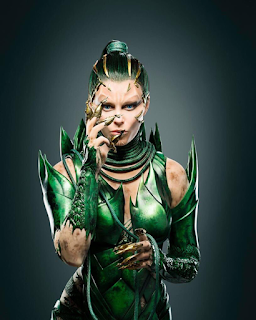 Despite the gritty look, yes, Power Rangers is still a fairly light-hearted movie that has humor as well as fun in it, the problem is that it takes forever to get to the reason anyone would ever want to see a movie on this, the monster stuff. No one saw Power Rangers asking for teen angst, they wanted the hero stuff, the giant monster battles, all of that, so why did the movie decide to lengthen the boring parts as well? Sure jokes are thrown in, the new teens are all fairly decent actors (though I suspect the blue ranger will be everyone's favorite RJ Cyler is actually pretty funny as Billy), but none of it makes this a must-watch, let alone something really worth your time. The only thing that will keep you entertain until the film's third act will be Rita Repulsa, I'll admit I had issues with the white-washing of the role, but Banks is just too evil and fun to not get some enjoyment out of her. 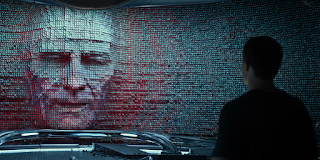 The worst thing about this new film, however, is the decision to make Zordon complicated in this movie, he's a wise figure, he shouldn't be given a hidden motive. Granted, the stuff on why he wants the teens to become Rangers is brief, but it does make him kind of a jerk and is the grittiest stuff the film offers. I hated this, and that it becomes the sole reason why the film needs to wait until the third act to let the monster fighting stuff happen is why it's the worst thing about the film. 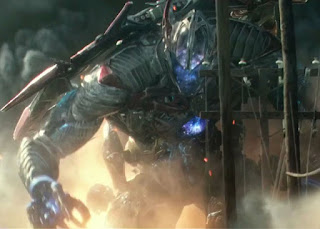 Once we get to the main event, yeah it's all pretty fun, we even get a nice use of the show's theme (my favorite part!) which is more than I can say about other TV adaptations of kid shows. Are there flaws here? Yeah the monster designs suck, Goldar is nothing like his TV counterpart and though I laughed at the product placement (Krispy Kreme will be used as an insult to this movie, watch), I know a lot of people will despise the use of it. For myself though, I didn't mind all that much once we got to the fireworks.

Power Rangers isn't good, but it's not bad, it's certainly better than the DCEU movies so far, it's just a little below decent honestly. It won't hurt to bring the kids to this, just don't expect to feel like a kid again.