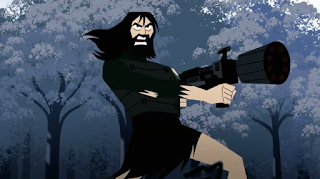 
Much like the original run, this episode shows how strong Samurai Jack was in visual storytelling. With the exception of two scenes, this episode is all about what we see, making for some really amazing visuals, letting our hero truly come to terms with how darker this new world is. Samurai Jack was always great for it's style, a department that continues to shine here, sure, it may not have the most movement, but the animation is top notch in just how beautiful it all ends up coming together.

This episode opens with our reintroduction to Aku, now voiced by Greg Baldwin, he seems to be living a more mundane life without Jack (turns out he destroyed all time portals, trapping our hero in this future), but he can't seem to get truly happy, despite Jack no longer posing a threat. There's a lot of humor in this brief intro, from the animation of Aku's now dull life, to Aku's self therapy, Genndy hasn't lost his touch in mixing humor with an otherwise serious show. Of course the big thing for fans here will be hearing an Aku, NOT, voiced by Mako, the result, Greg is fine, he doesn't have the same feel as Mako, but he works in a situation that was impossible to recreate perfectly from the original run, I hope we see more of him before we finish.

The main thrust in our story however, is Jack encountering the Daughters of Aku from the last episode. Seeing bits of the previous episode carrying over here is pretty interesting, despite the original run having a focus on Jack vs Aku, there was no real sense of continuity outside a few things, now we see how Jack works with a more direct, ongoing story arc. Once that scene with Aku ends, we're left with a near silent episode, outside of Jack arguing with a vision of his original self, an argument that seems to be somewhat meta, yes it is relevant to the story, but it also seems to be Jack's former self arguing about the current state of the show, everything feels hopeless now, perhaps it'd be better to just let it end, rather than try to actually reach the end of the journey.

All this gets mirrored with a subplot involving a white wolf encountering tiger like creatures, it has nothing to do with the rest of the episode, but the addition just meshes too well, giving the episode something very symbolic to make it feel richer. Jack's conclusion is the wolf's conclusion and we're left shocked by what has occurred, again, powerful visuals here.

One thing that I did feel was rather weak here, was Jack's encounter with one of the Daughters. There's a sense that this was meant to be the big "oh crap, this show IS more violent than I remember" moment of the series, in fact, Jack's self argument even alludes to Jack's shocked reaction to what he's done, but it feels a bit out of place. The problem is that the previous episode, as well as the wolf subplot both had pretty violent and bloody moments already, so the impact feels a bit lost here, sure, it is shocking to see Jack go that far, but I feel like the show should've made this the first outright bloody moment, it would've been shocking for us, in exactly the same way it is for Jack, robots are no longer the only monsters Jack faces. That all being said, I still loved the moment, just wish it could've been handled in a better manner so it could've really sunk in as a major moment of the show.

So far, Samurai Jack is really strong in it's final season, I'm not sure how exactly it will end, but I have no doubts in my mind that it will be satisfying and perhaps incredibly depressing. 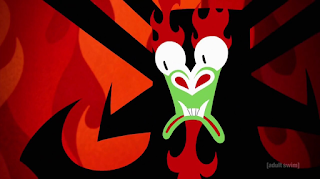