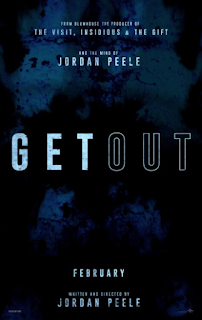 I promise I won't delve into spoilers but suffice to say, holy crap white people, are creepy!

So Get Out has been out long enough for everyone to agree it's one hell of a movie right? A horror movie that lingers in your mind because it's one creepy fucking movie. Forgive my swears, but seriously, I might not have jumped throughout the film (which doesn't really signify a good honor movie anyway), but the ideas in place, the build up to its climax and just the overall atmosphere, were enough to leave me with a chilling impression. I can't think of a horror movie that has spooked me this much in quite some time, the themes are that chilling and real. Get Out is the kind of movie you need to see to believe and I recommend you don't spoil yourself, much like I (regrettably) did.

There's plenty of people who will not see the third act twist coming, but the lasting effect is what really stuck to me. Racism is often expected in the form of some grouchy white person shouting slurs at us (minorities) but as we eventually find out here, racism isn't just about basic hatred, no racism comes in many forms, here it comes from the white guys who love to tell you about how they would vote Obama for a third term if they could. "What's wrong with that?" You may ask, well nothing really, at least if that's where it would end, as it turns out, continually praising black people (or any race really) while acknowledging them less as people and more like objects deserving praise, is just as harmful as treating minorities as lesser beings, you don't see us as people if you just see us as a prop to demonstrate how noble you are to your friends, you deserve a "fuck you" just as much as that guy saying "build that wall", but I'm getting side-tracked. If you thought this was a film about classy rednecks you are wrong, this is a film built on the fear of the racists who are much more destructive, the ones who claim (and believe themselves) to be our allies, which makes this all the more real and frightening. 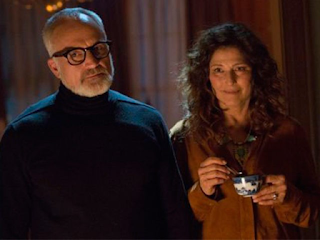 I don't hate white people, not at all really, but there's no denying any minority, be they black, Asian, or Latino (like myself) has experienced at least a moment in this film. Any time someone asks me about my name, commenting on its unique sound, or just making an awkward statement about it, I hold myself back from reacting as I wish to, making the racial moments here feel so real (before you ask, 95 percent of the time, these comments do in fact come from white people). I bring this all up because this film is not at all anti-white, but the situations can be easily viewed as racist, and yes we all have gotten a feeling of racism of this form. This film is horrifying because it feels real and preys upon our fear, while then evolving our fears into an extremely unnerving nightmare, even when we succeed, we are tools for their own pride, a dark reality indeed.

Make no mistake, though, Get Out also brings laughs with it, which makes sense given this is from Jordan Peele, but also it's a nice addition to a smart horror film. Sure, the laughs are there to lighten the mood, but they work because they provide a much-needed commentary often lost in standard horror films, when everything starts going to shit, the answer is, in fact, get the fuck out, craziness is best left alone, or sometimes horror tropes are just too silly not to laugh about. The point being, Get Out gets hysterical at times, yet it never feels off, which is no easy feat.

This is a hard film to discuss without delving into spoilers, but trust me, it's worth it. I'm barely touching the surface because you deserve a fresh view on this, so expect a follow up to this that won't be spoiler-free. This is a horror film that is creepy because it makes you think about unsettling things, the performances are great and sell the film which perfectly balances the horror and the comedy. Go watch Get Out, a fantastic horror film, that will likely earn a spot on my best of 2017 list, yes it's that good.