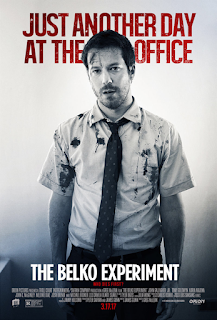 Imagine The Office, if they did a special where The Purge came to Scranton, that's pretty much this movie. 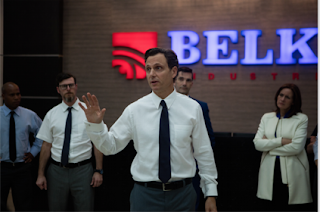 The Belko Experiment is the latest film from writer James Gunn (Guardians of the Galaxy), directed by Australian filmmaker Greg McLean, a horror film with all the common absurd humor, one would expect from a James Gunn film, it's fun! It's no masterpiece, but as far as I'm concerned, this is one fun horror film. The set up is fairly simple, Belko is a government facility (though what's never specified is what exactly is done there) in Columbia, the workers are locked out of the real world, with the only hope for survival being the completion of tests. The tests turn out to be murdering a select amount of fellow employees, failure to comply results in twice the amount being murdered by a mysterious voice in the building. It's a fun way to get bloody and nasty, seeing co-workers go insane, turn against each other, all on the edge, with every attempt to take control of the situation resulting in worse scenarios. 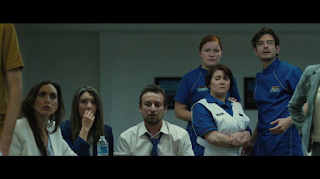 Everyone starts sane, but the descent into madness is just perfect and believable, these people grow desperate with every death that comes along, making for a pretty unpredictable film. Early on we get a sense of which characters will survive, but as the final test comes along, we already know, there's no guarantee of who will make it, everyone is potential canon fodder, I love that. My only wish here is that the desperation should've worked like that too, the main cast makes it fairly clear who will stay decent, versus who will become more driven to murder. At one point a woman starts offering her body to live (yes it can be trashy, but it's humorous), while I don't think the main cast needed to go in that direction, I do think they could've gone along those lines of insanity. At best, though, that's all a small gripe I have with the film, which is solidly cast (Sean Gunn specifically, steals the show) and make this a quick sit. 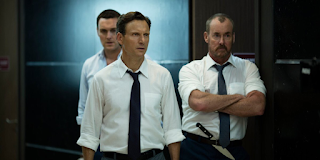 There's really not much to say here, you'll know if you like it based on whether or not you like the premise, it's that obvious. Do you like seeing films with a lot of kills and blood? You'll like this, like James Gunn? You'll like this, it's that simple. The movie does provide a pretty weird and stand out ending that feels like The Twilight Zone, but I don't think that will be enough to sway you if you're looking for something deep, this a fun, nasty film.

I definitely recommend this, but I understand that it's not for everyone, it's made for a specific audience and if you fall under that, you'll love it too. This is an exciting, visceral film, definitely worth the price of admission for any horror fan, The Belko Experiment kicks ass.
Support me on Patreon!