WHAT WENT WRONG WITH THE ICE AGE SERIES?

As the first year to feature an Academy Award for animated films, I'd wager 2002 was the year animation gained real traction in the United States, Shrek won the award proving Disney wasn't the only studio worth looking at, while Ice Age proved to be a hit among people, then the sequels came. While Shrek bowed for the last time six years ago, Ice Age keeps pumping out sequels and the result is a continually devolving mess, what went wrong? Well I have some answers to that. 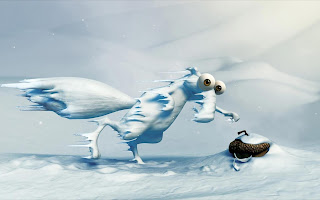 The easiest thing to say is that the sequels stop being funny or as well written as the original which is true, to an extent. Humor is subjective, what works for me doesn't work for someone else; so I'm not sure the series not being funny is a good enough excuse. I think where the humor went wrong is the continuing use of pop culture and modern slang, to the point that in the upcoming sequel (Collision Course) we see a mariachi band and a variation of the Statue of Liberty among other references, even if they make little sense to exist in this time period. I know this is a cartoon, but even by those standards it makes no sense, leaving those already unfunny jokes to be a bit harder to grasp. While the first movie didn't always stay within it's time line for humor, most of it did stay within a realm of plausibility, which feels odd seeing as now Christmas is apparently canon in this timeline.

Have you noticed how little heart these movies have now? The original Ice Age featured a touching scene with Manny, remembering how he lost his family, Dawn of the Dinosaurs featured Manny as a clumsy first time dad talking about baby proofing nature. I think The Meltdown tried having some heart with Ellie's backstory and talk of Mammoth extinction, but none of it was ever as effecting as anything in the first movie with Manny or the humans (by the way what happened to the humans in this franchise?), also what about after that? These movies no longer seem to even try to have heart.

If not for humor or heart, what does Ice Age have going for it as a series? Honestly, aside from being a big money maker (look up how much these movies make around the world) I think it exists because some exec thinks all these characters need to pair up. I find it incredibly odd how each sequel focuses on a character falling in love, in two Manny finds love, three, Scrat, four, Diego, five, looks like Sid and maybe six will give the one-eyed weasel, Buck, a wet cat to love, who knows; my point for the Ice Age sequels is that they have an obsession of growing the cast just for one character to fall in love, which isn't necessarily bad in theory, but as we see in these movies, a lot of the characters become useless annoying add-ons, meaning the love interests stop being actual characters after their first appearance, which ruins them because now those characters are just the girls in the franchise. I think the oddest thing about making this a franchise with a love interest in each film is just that, why devote movies to them if they aren't characters, I mean aside from Ellie being pregnant in the third movie I can name more things that Crash and Eddie (the possum twins) have done in each film since the second movie, just why? I'm assuming Diego's love interest won't do much in the new movie because we don't see much of her (or Ellie) in the marketing, but we do see the twins, as well as Buck who is apparently now their guide in adventuring, who knew these movies were also pretty shitty for their female cast members right? I won't say they're sexist, but the uselessness of the love interests just makes the franchise look desperate to say "see we have girls here, it's not all dudes" as if anyone was really complaining to Ice Age for that.

Before we get to where I think this franchise should've ended, can we all acknowledge how much these movies love ending the era it's in without it ever really ending? Seriously since part two each movie is some kind of end to the ice age, that one was the ice melting, three was the beginning of a new dinosaur age, four was the splitting of the continents, five is the asteroid that killed the dinosaurs (though now the ice age I guess?), six will be the animation studio fed up with the franchise erasing it, point is that each one is a crisis, despite the first movie being a simple journey. Now they're saving the world... What?! In fact they've gone through this so much, that the new movie features the same bad guys from part two, except now the vultures are something else. I get that the sequels often feel like they have to go bigger, but world ending events are now the norm for this series, making it hard to take it seriously, I mean change it up, even Civil War didn't have a world ending event just to keep it fresh.

In all seriousness though, I think these movies should've ended at three, that's not to say they were good up to that point, but three felt like the most proper ending for the franchise, which means this series is screwed... Well more than it already was. Part two had Manny dealing with being the possible last mammoth falling for another surviving mammoth, three had Manny regain his family, Diego accept his calm life, while Sid struggled with the idea of losing the herd/family, it felt proper, so why continue to Continental Drift? Not that the prior films were necessary, but that one was really unnecessary, and the continuation of the franchise just further drives my points. I can see where a good version of two and three can exist, but after that I just feel the franchise really stopped caring about any and everything.

Perhaps the biggest issue with this franchise lies with the studio and more importantly the first movie. I think the original Ice Age is just an okay movie, with one great scene (Manny remembering his family), but aside from that, honestly I think people only loved it because it was at a time where good animation rarely came from places outside of Disney, that's no longer the case, so it's harder to say it'd be as beloved if it came out today. Aside from The Peanuts Movie, I don't think Blue Sky as ever produced a movie that was better than okay, sure the original Ice Age had funny moments, but looking at it now, not much holds as an adult, it's just not awful humor for kids like the sequels, which makes some forgive it enough to give it a pass. Starting with an okay movie is by no means bad, but it does make the franchise weaker if the studio never attempts to be better.

Bottom-line, I think Ice Age has suffered as a franchise because it was never great to begin with and comes from a studio that sucks when it comes to story most of the time. While I do think the original is okay, I can't say I'm surprised that sequels to it haven't been good and don't care for anything at this point beyond cash. The only upside to all this is Scrat, a funny character who still produces funny bits within these films, aside from that, please stop the franchise, no one cares anymore.

Did you like this? Support me on Patron for more!