Adult, animated feature, two phrases rarely paired together, though recently that's changed as we draw nearer to Sausage Party, an animated feature by comedy filmmaker/actor Seth Rogen. The South Park movie, recently Anomalisa, and if you go back a few decades, you'll find the 70's and early 80's had a few too, yes R-rated (or above) animated films, so why is Sausage Party being treated as something special? Well largely because while animated films aimed at older audiences have been made, most never get big enough to leave an impact, I think we should make the animated R-rated feature a common thing, instead of an unusual occurrence. 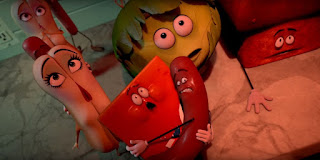 The most widely known "adult" animated feature among film geeks is Fritz the Cat, and it probably serves as the best example as to why it's never taken off for a lot of people. I enjoy Fritz the Cat, but it really is filled with a lot of shock material (i.e. it's shocking that a cartoon is nude) most of which is unnecessary and excessive, a complaint shared by most adult animated films from the West (I'll discuss more about the foreign ones in a bit), again I enjoy Fritz the Cat, but I do think it'd be better with less obsession  to just shock people with nudity, language, etc. I bring Fritz the Cat up, because the upcoming Sausage Party, seems to repeat the shock-value mistake that Fritz made, featuring a heavy use of language and vulgarity, Sausage Party seems to be mature for an immature crowd, which means it'll continue making animation look childish, regardless of quality,  and it may be a few years, if not decades, before someone tries making a mainstream animated feature mature again... Yet, most of what I've just said is part of the problem, yes excessive vulgarity for the sake of it is annoying, but what really stops serious mature animated films, is us.

I understand that Rogen's humor is not for everyone, I love a lot of his recent work (pretty much everything post-This is the End) and find that underneath the excessive language are some surprisingly mature themes (Neighbors 2 for example, is one of the years most feminist films, seriously), but yes I get why you might not like it. Sausage Party is shaping up to be another Rogen film with mature themes underneath the immature vulgarity (I've read the leaked script, for context); in fact the deconstruction of animated film tropes (mainly Toy Story) as metaphor for religion is brilliant, but also could only exist in a feature aimed at older audiences, the vulgarity is there for laughs sure, but without them the film might not be possible from a financial position, after all what exec wants to fund a cartoon that insults religion, unless it's explicitly for an older crowd,  like Family Guy, then the themes become a safer bet to make.

There's the sad truth for us in the West, especially in America, animation for adults must be shock-value entertainment to be considered as such. Unlike the animation created by other countries, (most notably the internet-beloved anime), we still view animation as "kids stuff", the only way to break that mold is to shock repeatedly, which is bad, but it's the way our culture has set us up. Japan gets to do mature animated features (among other countries) more commonly because they're more okay with that culturally, which shows a difference in what's acceptable between countries; for the time being, American animation isn't for adults, unless they commonly swear and it's meant to be a gross-out comedy. The mentality of the culture needs to evolve, but it also means that us, the animation fans must evolve too, we must accept that gross-out comedies must exist to help normalize adult animation.

To support the idea of adult animation, means we must show support and accept raunchy comedies like Sausage Party as part of the mature works, after all does Japan shun their raunchier material? I brought up Fritz the Cat earlier, and for good reason, yes, the, shock material turns modern audiences away most of the time, largely as an example of what maturity isn't in their minds, but it WAS a success, in fact the animation of that time-period (70's, early 80's) had quite a few animated films for an older audience, why did it succeed? Why did it end? Doesn't matter (my bet is that Disney was weak in the early years, while the 80's saw the rise of Don Bluth along with the rise of a stronger Disney) because family films would soon dominate the animation field once more, but they would also evolve. Animation used to be Disney, and Disney wannabes, now animation is regarded a bit more seriously, sure it's still largely "for kids",  but it also has an award dedicated to it at the Oscars, along with more broad descriptions, it isn't just Disney and Disney wannabes, it's Disney, Pixar, Dreamworks, Blue Sky, Lego, Laika, etc. I think that's great, but it can improve.

Supporting a raunchy animated film like Sausage Party may ensure more raunchy animated films in the future, but it will definitely ensure more voices get in on animation. Eventually just doing raunchy "adult" comedies won't cut it for some brave filmmaker, one will step up and use the R-rating for something more dramatic to stand out, but that's a risk a big studio won't take until they know it can succeed, and whether you like it or not, that kind of success for an "adult" cartoon doesn't exist outside of raunchy cartoons like South Park, Family Guy, Robot Chicken and whatever else. Supporting Sausage Party will ensure more studios gamble on mature-animated features, which means that hopefully one day, mature animated films are as diverse as mature live-action films, but more importantly, it hopefully leads to animated films not having to be rated R to be considered mature.