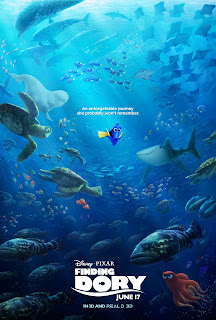 Thirteen years later comes a sequel and I'm pleased to announce it's good, also it only took three minutes into the movie for me to cry, a new record I suppose.

Going back thirteen years ago, Finding Nemo was the first Pixar film I had ever seen in a theater, sure it wasn't the first Pixar film I had seen (that would be Toy Story, my first VHS) but it holds a special place in my heart for that reason. I never thought a sequel could live up to the standards of the original, let alone even be a good idea, but Finding Dory proves it's a great sequel, even if it isn't a superior film, which is fine by me. To date, I've yet to see a bad sequel (or prequel) from Pixar (I enjoy Cars 2), but their track record isn't perfect (I disliked Brave) and their recent films, however fun, haven't exactly been among their best (Except Inside Out), so I wasn't sure how I'd feel about Finding Dory initially; the original ended perfectly while the news of its existence appearing shortly after John Carter bombed (both directed by Andrew Stanton) just didn't sound like a worthy film could be made, luckily, I was wrong.

The exact moment I realized Finding Dory was going to impress me was the opening, a short intro to baby Dory is the newest heart-breaking Pixar moment, it's a scene that got me tearing up and I'm okay with that. Pixar is known to make heart wrenching sequences, it's one of their specialties and honestly this movie might be their saddest yet, anyone with children (especially children with disabilities) be warned, this movie will hit you hard, I don't even have kids and this movie had me crying more than anything the studio has produced before (yes, even that Up intro) which just shows how well Pixar does sad sequences.

So how did Pixar continue the story Finding Nemo started, largely by giving Dory a backstory and family to look for (which of course drives the films plot), but on a thematic level, showcase a character with a disability succeeding, showing us, and more importantly parents as well as children with disabilities that they can in fact be fine even with those disabilities. Remember, Finding Nemo focused on Marlin having to accept that his child Nemo was capable of great things, even if Nemo had a tiny fin on one side, Finding Dory continues that message, but from the viewpoint of the character who is "limited" by their own disability, making Dory's success feel a bit more empowering. Dory, as you may remember suffers from short-term memory loss, a disease I'm sure some families have a hard time dealing with, but the film makes sure to handle the representation well without mocking anyone with it, as a result the film feels like a love-letter to anyone who deals with short-term memory loss, or any disability for that matter. What could've easily been Finding Nemo but with more beautiful animation and characters is not what the filmmakers give us, well, at least entirely (there is definitely more beautiful animation and characters), because they went out of their way to give one of the more empowering films about diversity with Finding Dory, I'm proud of that.

I'll admit, Finding Dory is definitely Pixar's most emotional film, but sadly it isn't without it's flaws which stems from both a technical aspect and a story one. Finding Nemo is still, without a doubt one of Pixar's most beautiful offerings, so Finding Dory had a lot to prove and it doesn't quite top it for me, largely because the movie stays within a marine institute, which offers some beautiful imagery but never quite reaches the stuff from the original. On a purely technical level, yes this looks better than its predecessor, but unlike the original, the journey here is in a smaller location, so there's not much room to squeeze a variety of imagery, which isn't terrible given that the story makes it work, but it doesn't allow for much of the same visual wonder created by the original. Speaking of story, the movie has a particular weakness early on, largely when the story starts going as it ends up feeling like they're quickly pushing fan service-esque bits (like a Crush cameo for example) which didn't exactly fall flat, but did feel a bit much, luckily that ends quick and the film improves once the plot is fully set up, at least until the climax. I like chase scenes, they can be very fun and admittedly this movie has a fun chase for the climax, but it does feel a bit scattered in tone here, in fact the whole bit feels like it doesn't fully belong in the film, I can't pin it down why exactly, but I keep thinking back to how Marlin calls for one of the new characters in this film and suddenly she appears, it's a bit random but I'd be lying if I said I didn't fully enjoy it. It's not always perfect, but when it hits hard, Finding Dory succeeds.

It's not often that a sequel to a movie that felt like it ended perfectly works, but this one does, largely because the emotion is there. Marlin and Nemo may be pushed a bit to the sidelines, but they craft a good subplot with them after Marlin reacts a bit harshly to Dory (I liked that Nemo calls him out on that throughout their journey), which also allows them to strengthen the films message by the time it ends. Pixar's greatest achievement this time (aside from the emotion) is Hank, an octopus who helps Dory on her journey, aside from the great animation on him, and Ed O'Neill's fun performance, Hank provides a lot of the heart for the story, even if we never fully learn his backstory we understand plenty by what we're given, he steals the show much like Dory did thirteen years ago for me. Thirteen years ago I wasn't sure a sequel to Finding Nemo could work, but I'm here to tell you that Finding Dory is a worthy sequel even if it's not perfect, the emotional punches this pulls is great and I'm sure that the kids of today will be as amazed by this as I was with the original.

Did you enjoy this? Consider supporting me on Patreon for more.