I don't care what anyone says, Bebop and Rocksteady is worth the ticket alone. 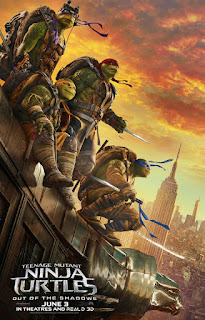 Upfront, yes this movie is better than its predecessor, by miles, I might not have hated the last movie as much as others, but yes, it still was pretty bad, this time though, I can safely say that Teenage Mutant Ninja Turtles:Out of the Shadows, is a fun movie. I'd like to tell you this movie sucks, I'd like to hop the bandwagon dictating any Michael Bay film is horrid, but I just can't, the movie may not be high art, but it never stops to try to be that, its goal seems to be trying to recreate the feel of the 80's cartoon show and they succeed, they won me over. This movie is junk food, but it proves to be enjoyable as it lasts, I cannot believe that, but trust me it's true; is it good for you? No, but you'll enjoy the experience, which is sometimes needed more than the "healthier" alternative.

Out of the Shadows won me over right away, reason being that unlike the previous entry, we open with the Turtles this time, showcasing that this time the movie is theirs. One of the biggest issues everyone had with the first movie, is that the Turtles felt more like secondary characters in their own movie, not so this time, April rests comfortably as a secondary character, as do the humans, the brothers lead this movie, with Michelangelo being the heart of the film, Leonardo providing the lesson, Raphael providing the character growth and Donatello... Okay Donatello just provides the tech and occasionally the plot points, but trust me they're fun together and that's what matters.

As you might've already seen in the trailers, Out of the Shadows is about the Turtles having to stop an alien invasion from the Krang, with the help of Shredder and new henchmen Bebop and Rocksteady (more on them in a bit) because... This is pretty much a kids film, so why not? Sometimes bad guys work together because that's what bad guys do in Saturday morning shows, it's all for your pleasure. The movie doesn't really try to be about much else (though one unintentional thing here feels confused, I'll explain later), it's by all means a classic episode of the 80's cartoon pumped up to a modern live-action movie, flaws and all.

My biggest praise for the movie is Bebop and Rocksteady (played by Gary Anthony Williams and Sheamus, respectively); They make the movie that much more fun to witness, the kid in me was purely delighted whenever they're on screen (I wasn't even bothered by the fart joke they made), their appearance in the trailer sold me and I am a happy customer. From the design, to the personalities, Bebop and Rocksteady were perfect, the kind of thing I'd wish Bay would do for the Transformers movies, just perfectly recapture the spirit of the material. My biggest wish is that Bebop and Rocksteady return for the inevitable sequel, because their loss will severely hurt any follow-up, their chemistry here is just too good, as mentioned before, the kid in me was delighted, they steal the show.

Shredder returns (now played by Brian Tee), but there's not much to him in this movie, at least action-wise, which is strange because Krang (voiced by Brad Garret) doesn't do much beyond fight the Turtles in the last act, more surprising though, I was fine with that. Would I prefer seeing more Turtle vs. Shredder action? Absolutely, but Brian Tee provides a fun performance as him, one that builds him up as a huge threat, that I'm willing to let it slide, because I did feel intimidated by him, likewise, keeping Krang out for most of it made that final battle a bit more engaging for me, not sure why, maybe it just made the spectacle in each fight that much more unique and fun. I'm not entirely sure why the Shredder never fought the Turtles, but I do get the feeling that it may be a budget reason; considering the Turtles (or any other CG creation) never fight actual people in a hand to hand fight, I'm more than convinced that with a bigger budget the next installment may finally include them, which means support this good Turtle film, for a better one next time, that sounds bad, but after the joy found here, I surprisingly lack much anger to that idea.

So what keeps this movie from being great? Well, a few things, a lot of leaps in logic, the story could perhaps be a tad shorter, the script a bit tighter, but mainly Casey Jones (played by Stephen Amell) who is useless fan-service here. I'll be completely honest, I'm not a Casey Jones fan, he's never really been a major part of my enjoyment of TMNT (any version) so him being a weak link doesn't surprise me, but man does he feel useless here. Amell works hard (at least I think he's trying to here) but the material given just did not work, he's a disgraced cop trying to redeem himself by capturing Bebop and Rocksteady (who were being transported with the Shredder, before they all escaped), which makes little sense considering everyone else is on a man-hunt for the Shredder, but whatever gets the fans happy I suppose. I don't know if fans will like Amell as Casey, but I doubt they'll appreciate the fact hat he only wears his mask in one fight scene, so I think that may be a major deal breaker for some.

One other thing (this may be a bit SPOILER-ish so skip to the next paragraph if you haven't seen the movie), I will not accuse anyone working on this as transphobic, but yes, I couldn't help but feel some of this was a bit transphobic. I may be reading too much into this movie, but the Turtle subplot about Mikey, Raph, and Donnie wanting to be human, with Leo denying them that felt a bit like a transphobic statement, again I may be reading too much into it, but that couldn't help but come to mind, sorry. I will admit that the movie acknowledging that Leo is in the wrong, leading to him deciding it's his brothers choice to go through with any changes they want, was a wise enough on the filmmakers part, but the ultimate decision the brothers make (guess what it may be) is both understandable and awkward, in ways that make it hard for me to really figure out if it is unintentionally transphobic, or just my silly mind reaching a conclusion that isn't there. I don't file this as a fault of the movie, largely because it is my interpretation, but I am curious if this stuff bothered (or will bother) any transgender fan.

I really like this movie, it's no masterpiece, but somedays I'm fine with that, happy in fact, especially when I feel reminded of the same feelings I felt watching the classic cartoon as a kid, this film captures that. Faults and all, I recommend Teenage Mutant Ninja Turtles:Out of the Shadows to any fans of the classic show, and maybe some non-fans who enjoy a silly film every now and then; this movie is junk, but proudly so, it's hard to not smile, especially for Bebop and Rocksteady.