As most of you know, this week saw the release of Independence Day:Resurgence, a  sequel to the 20 year old movie that to some is an action/sci-fi mess, while to others it's a dumb, occasionally fun, product of its time,  I'm somewhat in the middle, yeah parts are fun but the movie as a whole sucks. I bring up Independence Day because I originally wanted to do something relating to it for this week, but instead I decided to highlight a sort of forgotten film that also honors the classic B-movies of the 50's, Mars Attacks!. 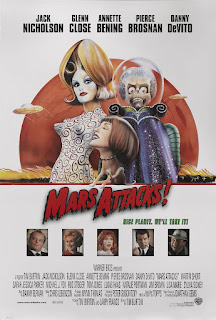 Weird barely describes this film, this is downright strange, which in a way makes it worthy of a watch even if you never get fully on board with the film. Tim Burton directs this oddball sci-fi comedy, and while his style isn't quickly apparent, the story does carry the kind of strange charm one can only find from a fun Burton film. What starts off as a very typical sci-fi film, ends that way too, which may not sound great, but once I saw how much love for these kinds of movies were on display, I just could not help but smile, seriously this is a love letter to classic B-movies that mocks the silliness of them, without ever trying to be above them, which is charming in its own way.

The set-up here is nothing new, aliens come to Earth, aliens threatened Earth, people can't fight back, until a miracle solution is found, if that statement sounds like a spoiler to you, then I wonder if you even know what science fiction is. What helps the movie stand out is that while the plot may be familiar it's the details where the differences shine, yes the aliens attacking us is nothing new, but the satire on politicians, scientists, news reporters and various other people makes the film work because it's delivering characters being played straight, while acknowledging the flaws inherent to these figures; for example, Pierce Brosnan appears as a scientist who claims that because the martians are intelligent and technologically advanced, they cannot be violent, it's goofy but it works because the logic in that ignores obvious facts, like Americans killing Native Americans for land which disproves that logic. Sure the film is essentially a big-budget B-movie, one that has little to say about the genre, and a lot to mock about itself, but it's fun in how much it perfectly recaptures the feel while being unashamed in its own cheesiness.

I wasn't sure I'd  like this movie early on, largely because the movie does drag in the first 30 or so minutes, but trust me, the small laughs you get early on build to bigger ones once the martians arrive on Earth. I think the movie works once the martians arrive because that's when the movie fully embraces its campy origins, whether it's the design of the martians (brought to life by CGI that is still pretty solid considering its time) or just the fun ways they destroy, kill and experiment on life. I almost wanted to hate some of the cast early on, but as it turns out, much like the film the cast does improve once the movie, largely because the huge cast becomes an excuse to create a chopping block for the film that leaves no character safe. I think the movie needed a smoother first act, but that becomes a minor issue if you sit long enough to get to the fun second and third acts of the movie.

I wasn't sure how much I'd like the film when it became apparent that the people looking for peace were idiots, but thankfully even the war-mongering general is an idiot, just a different breed of idiot, in fact the movie seems to suggest that it's the kind slackers who are the real geniuses, which makes sense (in a strange way) considering the movie seems to be aiming at both sides being wrong, so the only right is not guessing what will happen and acting on what is presented in front of you... Okay so the message isn't exactly the best, but it fits in this odd movie. I honestly enjoy this way more than Independence Day, yeah the destruction isn't top-notch like that movie, but it's unique, Independence Day doesn't stand out anymore after so many destruction films that have topped it, it also works because it doesn't try to be more than cheesy fun, Independence Day does and it suffers once you see how dumb it all is. From the enjoyably fitting music to the cheesy but fun to look at destruction, Mars Attacks! is a fun movie reminiscent of the classics of the 50's, I think you should give this movie a shot the next time you want to see an alien invasion film, it's superior when compared to the other alien film from 1996.