WHY THE LEGEND OF ZELDA SHOULD BE A MOVIE FRANCHISE!

This week we see the release of Warcraft, the latest videogame adaptation to hit movie screens, early word says it's not good, which sucks, but it did get me thinking, you know what fantasy videogame deserves a movie franchise? The Legend of Zelda. 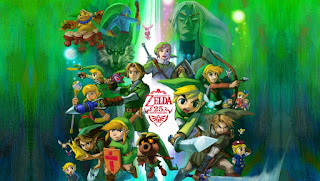 I will never deny my love for The Legend of Zelda, it's a damn good series, sure it's probably repetitive at times, but the exploration and lore of the series is just too fascinating to hate. As a fan of videogames (though mostly older franchises) I've always wanted to see a videogame movie that is well received, that has yet to happen, I'm not sure when we will get respectable videogame movies, but I do hope Zelda is in that wave of movies. I think The Legend of Zelda has potential to be a pretty great franchise of fantasy movies, if not odd, largely because the lore feels unique to cinema; the things a franchise of this movie could do would be really impressive (assuming they're done right) which is what I love so much of the notion of a Zelda movie franchise.

A major part of Zelda games, is that nearly every single one reboots the series, sorta, the thing about the games is that the "legend" part of the title mainly refers to the series always taking place in different times or timelines, because these events happen every generation, but in slightly different ways. I'd be interested in seeing a movie franchise tackle that, it'd certainly be the best excuse to keep the same continuity, while using different actors every single time, almost like Doctor Who, but whole new generations rather than just one guy regenerating. I'd honestly like to see how the movies handle that part of the lore, do they acknowledge it and use it whenever one actor gets too old/ tired of the role, do they it in every movie, and most importantly in my mind, is it a way they get to provide diversity? Could we see a Link that is played by a woman? A Link that is hispanic? A Link for every man, women, and child? That would probably get me killed to say online, but yes, I think a major part of what would make The Legend of Zelda a major stand-out in fantasy films, is that as a franchise it could easily have so many different people of color and genders leading every film, and it wouldn't matter much because the franchise is built on different timelines, so why make all Links white men?

Okay, time to step back a bit from the progressive stuff, because hey, we also have to put some really cool and unique story stuff to really sell this stuff. Considering time travel tends to be a major part of this series, it'd be interesting to put that in the movies. For starters, I can't think of many fantasy films that feature time travel as a plot device, especially since time travel tends to be a sci-fi thing, so seeing the right usage of it would make for an interesting way to hook people unfamiliar with the franchise, it's unique compared to most, which would be a fun story element to use in movies featuring wizard pigs and zombies. The biggest plus to time travel is that it could be used to make a special "Avengers-esque" movie (which makes the Links of different races and genders seem like a much better idea) imagine that, many different Links together to fight a great evil, tell me that doesn't excite you. So time travel would be an interesting piece of the games to bring to the movies, it even provides a good reason to make the Links diverse to make each stand out, so I say bring it.

Finally from a standard viewers perspective, seeing the costumes, props and creatures would be fascinating. I love "pig" Ganon more than Ganondorf, so to see him and other villains brought to life would be amazing, would they be CG or practical? I don't know but I hope a combination of both are used to make Ganon and the creatures interesting to look at, my mind is pretty blown away by the possibilities of the work. Of course then there's the cinematography and costumes, you gotta admit, it'd be pretty hard to mess up that department, cause there's just so much interesting visuals to be used for the landscapes and on the character's wardrobes, enough to make a good Zelda film a stand-out for the genre. Which of course leads to the fighting choreography, now even if they stick to Link using his sword, the stuff there would be pretty interesting, but what would be really impressive if they incorporate all if not most of his equipment; imagine seeing Link in a fight where he has to use his wits to win, leading to multiple tools being used, like the whip, the hammer, the iron boots anything, that would be cool to see. The average viewer may not always prefer seeing something new or smart, but that can be okay at times, let them have spectacle and visual wonder, like the action or effects possibilities of a Zelda movie.

I love The Legend of Zelda, I'm sure I'd love proper movies on the franchise, but I'm also sure a little variety wouldn't hurt, which can easily happen given the lore. I don't know if we'll ever see a great videogame movie within this decade but I hope when we do, Zelda is among the driving forces. Hollywood, Nintendo, please consider making some of this a reality, while I go back to doing my usual thing okay? I think the audience will appreciate it and you'll be richer for it.

Did you enjoy this? Support me on Patreon