So this isn't common right? Most people just review the finished product, but I decided to do something a little different, a review based on the script, don't worry I'll remain spoiler-free (for the most part). 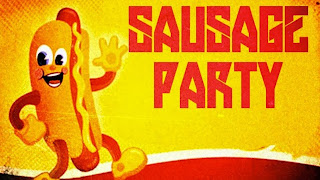 Alright, so upfront, this won't be a complete review, I'd like it to be, but, since I'm basing this on the script, I can't fully judge the film yet, also given a that the movie is out in a few months, I'd rather be fair and avoid as much spoilers as possible, sound good?

Sausage Party is for many people, the first R-rated animated feature they'll see in theaters, an animated film about talking food and their reactions to the truth of their existence. As many of you have probably gathered from that statement (and the trailers released) this movie essentially takes the most known Pixar subject in stories (inanimate objects come to life, worship their owner) and takes it to a horrible extreme, that is food comes to life, sees humans as gods, becomes frightened upon realizing what their purpose is, it's that simple, but how far the movie runs with it impressed me. I'd like to think this movie is in a way, an unofficial Pixar film, because the subject matter, and approach (minus the excessive cursing and innuendos) feel very much like an insane Pixar movie, that decided after two decades it was about time to question the formula the studio has crafted, basically what Frozen was to Disney animation, but taken to an extreme that will shock you.

I've made it no secret that I love Seth Rogen's work, especially post This is the End, the man knows how to make raunchy comedies funny, as well as having a surprising amount of depth, but Sausage Party may become known as his masterpiece. Written by four different writers (Seth Rogen, Evan Goldberg, Kyle Hunter, Ariel Shaffir), Sausage Party winds up having an incredibly sharp, vulgar script that never stops being funny, every joke had me laughing, even the visual stuff worked, and yes, I'm still basing this by what I read, that's good writing if I knew exactly what was going on by reading it.

If there's one weak link here, it may be the villain of the film, Douche (yes a literal douche) has a funny backstory, and I won't say his bits are completely pointless, they just don't feel as cohesive as everything else. Despite a lack of connection to the meat of the story, yeah I almost want to give him a pass, largely because Douche gets a lot of fun stuff to do in the film, who knows, maybe Nick Kroll's performance along with the final product, may change my mind.

Another possible deal breaker is the stereotypes, as offensive as they were, I enjoyed them because admittedly, the jokes landed, but I will understand if others don't. Personally, I felt the racial humor attached to the foods felt like a commentary on stereotypes in animation (let's be real, while the Cars movies never went offensive, some of the characters did feel a bit stereotypical, and I enjoyed those movies), but as always I could be wrong, they could've just been the crew's attempt at racial humor without having to actually make offensive caricatures of minorities, but given the people involved usually are progressive, I feel that's not the case.

This movie successfully lampoons the Pixar formula and religion going by this script, with a hint of Disney (largely in the Alan Menken written song, which takes a dark turn along the way), it's hilarious, and turns the film into something really special, hopefully the final product keeps this, or better yet, perfects it even more. I loved Sausage Party, just reading the script shows a sharp story that turns everything you know from animation on its head, it's insane, but the themes give it a weight that make it more than just a stupid comedy, give it watch, I know I will.