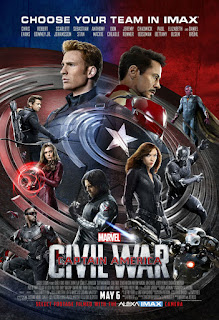 This is how far we've come in superhero films, it's glorious, beautiful, simply amazing, proof that films can have a huge cast without losing a coherent story, Captain America:Civil War is the best rebuttal to the "superhero movies ruin cinema" conversation some critics make. I know most of you will write my praise off, claiming that I'm too much of a fanboy, clearly my judgement is biased, but that is simply not true, yes, I love most of the movies from Marvel Studios, but my love is not based in my love for their comics, I love this movie for the same reason I've come to love the studio, support, appreciation, and love for all their characters. Civil War, much like all the movies in the Marvel Cinematic Universe, is primarily a character piece, an action movie second, we come to see cool fights, but the most stand out moments stand out because we love the characters, that is what pushes these movies to be real gems, and what pushes this to become a real masterpiece in the genre and in modern film. Marvel Studios has succeeded these past few years, because of their love and understanding of characters, for example, the movies would never succeed if they all acted like Tony Stark. Even if there are similarities between certain characters, Marvel has succeeded by making each character unique enough so their interactions all feel unique to each other. Simply put, this movie could not work if the only difference between the teams was that one decided to side with U.N. while the other didn't, seeing the reasoning and logic is why it becomes something special. Captain America and Iron Man are both right, yet they are both wrong, who you side with is based more on your own reasoning, not who the movie tells you to side with, the brilliant complexity in that is why Civil War is so great.

Tony (Iron Man) and Steve (Captain America) are arguing about the control of peace, and the freedom to chose peace. Tony prefers to have a system that accounts for all damage, so that he can ensure all lives are as safe as possible; while Steve opts for a freedom that allows him to fight and keep peace whenever he feels it's right, not when the U.N. deems it necessary, regardless of how dangerous that may end up being. On one side, heroes fight without supervision, enabling them to do the right thing on their own, on the other, supervision is what keeps them from accidentally injuring others, while keeping the heroes out of fights the U.N. deems unnecessary, Tony has been built up to like control, while Steve has always stood for freedom, even when it didn't seem right, these ideologies are what sets the movie in motion.

I may spoil a bit of the movie from here on out, so if you haven't seen the movie, you may want to skip the rest, Until you've seen the film, you've been warned.

Playing as a follow-up to both Winter Soldier and Age of Ultron may sound confusing, but Civil War continues to show Marvel's strength in making movies accessible to newcomers, regardless of the amount of material that came before. Civil War doesn't condense characters and story into a two and half hour runtime, it tells a complete story, filled with characters, not all are as important as the next, but each is given their time to shine, each given enough time to service their purpose. Hawkeye, Ant-Man and Spider-Man are mainly around to be in the amazing airport fight, with only Spider-Man having another substantial sequence in the film dedicated to him, (yes Hawkeye and Ant-Man appear in a few more scenes, but they're mainly to establish that they're in the film, or do not focus on them entirely) a sequence, which is largely there to introduce new actor Tom Holland (who is great here) while reinforcing Tony's viewpoint so we can sympathize with his argument, see? Characters given time to service the story, not take away from it.

Impressively, we do get minor characters with their own story arcs here as well, Vision, Black Widow, Scarlett Witch, and even War Machine are fleshed out here in ways we haven't seen until now, and it all works. The Vision and Wanda (Scarlett Witch) are presented here together in most scenes, sure it's to tease fans who know these characters end up together, but it also presents arguments on how both characters operate, Vision joins the U.N.'s registration act to keep control, while Wanda doesn't reject it, but neglects to join due to a fear of lack of control; by the end we see how their choices ultimately transform them after that spectacular second-act airport fight, which end up complicating matters, keeping in tone with the film's indifference to either side, is Vision's desire of control right? After all, his lack of control in himself impacts his team in a bad way, while Wanda's decision to fight, even if she doesn't have full control ends up helping her team, though this also has its own consequences, again you decide who was right. Natasha (Black Widow) and Rhodey (War Machine) both support the U.N.'s decision, but it's how they arrive to it, and where they end up that makes all the difference, even if it's a bit predictable, they both become arguments for their own side, almost like one is set up as a counter point for Tony to make about his own side, while the other becomes the rebuttal to that, to reaffirm his stance. Civil War plays with all these characters, as well as some very minor characters like Crossbones, to get across it's own themes and ideas, while letting the characters attract us to those ideas, which is why the film works, despite having all the prior material, what really matters is the ideas, the characters are mainly there to make it more accessible to an audience, but we identify easier by knowing how the characters arrived to their choices, and in the end we aren't lost because the arguments come through just right.

Captain America is the main character here, this is his movie, so his argument is given more weight to it, but the movie isn't afraid to balance that out. Sam (Falcon) and to an extent Sharon Carter, support Cap's side of the argument, the freedom to do what he does keeps the wrong man out of punishment, but Bucky's major involvement complicates it, is Cap thinking clearly? Or is he being selfish in his choice just to keep his longtime friend at any cost? The film hints at Steve lacking good judgement when it involves Bucky, but it also ensures us that Steve was right in his early assumption that there was more to the Winter Soldier's (Bucky), crimes than the U.N. assumed. We are given ample evidence to agree with Cap, but just as much is given to disagree with his views, that by the end we are given the impression that Cap may have been wrong all along, or at least disappointing in the views he once held so high.

Iron Man is presented to us as a man growing in his loneliness, one who is continually hurting those close to him, yet he's the only one who seems to be focused on keeping all lives safe, while keeping the Avengers, the closest thing to a family for him, together. Tony desires control, and while that may have backfired in the past, including his last screen appearance, he at least understands the concern of death in the lives they protect, he wants everyone safe, he's not satisfied with most people surviving, he wants everyone to walk away safe, whether it's to clear his conscience of having caused the deaths of many, or a desire to be a better hero, it doesn't matter, there's selflessness in his choice, while also roots of selfishness, much like Cap. Tony isn't exactly in a worse place because of his choice, but he, along with Cap, divide the team, one for not focusing on keeping the team together, the other for trying too hard to avoid it by any means necessary, the harsh truth being, their decisions aren't built on selfish desires, but their approaches may be. Iron Man is lonely, who's at fault is up to you here, but Cap isn't exactly helping there, partially because Cap has been just as lonely, his response to that loneliness builds his choices, much like Tony.

I'm sure you're wondering who the villain in the movie is by now, the truth is the movie barely focuses on him, Helmut Zemo (better known to comic fans as Baron Zemo), works because of that. A lot of people seem to forget this, but length isn't always the best way to judge a villain, let alone a character, sure Zemo barely appears, but he's a subtle villain who leaves an impact; his goal is simple, but devastating as we see in the movie's climax. Zemo is chilling throughout Civil War, because we don't know what he's up to for most of the film, but we know the effects of what he is causing, and once we do know what he's up to, he becomes a very nuanced villain, who becomes an excellent mirror for Black Panther to reflect upon during the climax (who surprisingly is given a complete origin story here that works), Zemo, as it turns out, isn't your standard villain, he is given an understandable, but extreme viewpoint. Zemo makes the most of his screen time, resulting in one of the MCU's best villains, while also proving how good Marvel Studios can be with characters.

At this point, Marvel Studios has proven they can make masterpieces, they've proven that they deserve a place in film history, not just for popularizing cinematic universes, but because they've shown how to make high art out of cinematic universes. Captain America:Civil War is one of Marvel's greatest accomplishments, if not their greatest, it's a movie filled with some of the best action scenes ever put to film, a lot of incredible character performances, while also being one of the few blockbusters to ask big questions without ever giving a truly concrete answer, because sometimes the right choice isn't an easy one to make, compromise will be made to some issues. Marvel Studios has earned my trust and with this movie, they've proven that they deserve it.

Did you like this piece? Support me on Patreon for more.