It's pretty rare to see a sequel to comedy outdo the original, this is one of those rare occurrences. 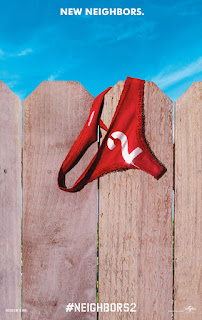 Recently, I made a piece about what was my favorite comedy in the last ten years (read that here), one of my main points was that not a whole lot of comedies are re-watchable for me, which still remains true, but I may just have to add another movie to that list of re-watchable comedies. Neighbors 2:Sorority Rising, isn't just a funny movie, it's vastly superior to the original Neighbors, which was funny, but it wasn't one that left much of an impact afterwards. I don't know if anyone expected much out of this movie (which pretty much recycles the premise of the first movie, though replace loud frat boys, with loud sorority girls), but surprisingly, the gender change on the rival neighbors makes this one stand out, largely because this silly comedy is now given some much welcomed depth.

In this movie, we find Mac and Kelly Radner (Seth Rogen and Rose Byrne) ready to move when a second child is on the way, but an issue arises after they realize the house is on escrow (relax, the movie explains it) and their new sorority neighbors puts their situation in jeopardy. From the premise, we get an obvious idea of how the movie will work, the gags are gonna be recycled, except now it's girls; except, once you watch the movie, you realize that's not the case, in fact early on the movie makes it clear, they can't handle the girls in the same way, they handled guys, which leads to new material. I'm not gonna act like the movie is original (it's a sequel, by definition it can't be) but the new ideas implemented work to the movie's favor, sure it's essentially a prank war movie, but unlike the first one, the "pranks" feel less like simple shenanigans, and more like fully planned assaults to ruin each other, which are hilarious, even if it does create a plothole (why can't they call the police this time?), but look, the first one had a similar plothole, and it becomes easy to forgive when you're laughing too hard to care.

Surprisingly, Zac Efron returns in this sequel, acting as a mentor to Kappa Nu (the sorority), only to then switch sides upon being betrayed, at first this appears to be a lazy way to get fans of the original to cheer, but he soon becomes one of the more poignant characters in recent comedies, working strongly in the movie's favor. Efron was already funny in the original, but here he's given material that makes his character (Teddy) practically worthy of his own movie (let's refrain from that though okay?), with his arc in this movie being an especially well made one.

Of course the biggest highlight though. is the sorority, Kappa Nu, specifically the founders Shelby, Beth, and Nora (Chloe Grace Moretz, Kiersey Clemons and Beanie Feldstein) who push the movie into a territory that makes it really stand-out, this is a female-empowering film. Sororities are not allowed to throw parties, the film makes that (surprisingly true) fact clear, but Kappa Nu sets to change that, especially once it becomes obvious that frat parties are by design, just meant for guys to get laid ("that was rapey" says one of the founders early on). Despite any shortcomings the movie may have, I believe the added depth is what really helps the movie, it makes for a more compelling reason as to why the dean can't step in on this one, as well as gives the leads something to really consider (should they really stop these girls from showing their independence just for their own selfishness? especially with a daughter of their own?), it works.

All that being said, the surprising weak link this time, is in fact the two leads, Byrne and Rogen are great, but without much of an arc this time, which makes them less compelling. Efron is doing the growing up arc that the Radners did in the first movie (more effectively though, given that he's young enough for us to feel his frustration in not being the adult his friends have already become), while the girls are given a really compelling story to go through, which leaves the Radners being funny, but feeling like supporting players in their own movie.

I really liked Neighbors 2, it's not the deepest comedy around, but it is one with a great topic to work with. Sure the leads are just there for laughs, as well as to set the story in motion, but I can't deny that it all works better with their new rivals, so much so, that the movie doesn't really bother repeating any jokes from the original, how rare is that in comedy sequels? I don't know if this will become one of my new favorite comedies, but I do know I'll be watching it a few more times in the coming years, more so than it's predecessor, that's for sure, and I recommend you do as well.