I love watching comedies from time to time, honestly, who doesn't? Laughter alleviates us from the worst of times, but in terms of comedies, my particular favorite in the last ten years is definitely an underrated gem; that gem being the John C. Reilly masterpiece, Walk Hard:The Dewey Cox Story. 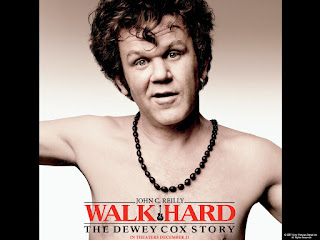 I'm no stranger to comedies, in fact I see more than a few every year, which is enough to pick up a sad truth about the comedy genre, most comedies lack any real staying power. I want to be clear here, I don't think comedies suck, considering I look forward to most Seth Rogen comedies, in fact most movies that make me laugh in their trailers are must watch films for me, so I doubt anyone can honestly say I hate comedies, but I can admit to rarely ever re-watching them, because most comedies are funny the first time, but lack the same punch after a first viewing. Aside from a lot of movies WITH comedy elements (Guardians of the Galaxy, The Lego Movie, Deadpool, amongst many others), there are very few primarily comedy films that I can name in the last five years that left a mark on me in any substantial way (Spy, 22 Jump Street, This is the End, amongst maybe five others), why is that? Honestly, it's because jokes get old quick, some have lasting power, but a lot of the things we find funny, stop being funny after the third or so retelling, we need breaks from them, sometimes, in fact most times, years long breaks. I rarely see comedies again right away, because the punch isn't the same at home in most cases, but as said before, there are some that can break that, my favorite of the last decade, as mentioned before is Walk Hard:The Dewey Cox Story, which I'm sure has you curious.

Before we go any further, this is not a review of the movie, yes I am discussing the quality of the movie, but it's mostly to talk about why the movie works so well, what, in fact, makes this the best comedy in the last ten years. Also, just to be clear, I am going to spoil a lot, so if you haven't seen this, and I know a lot of you haven't, now's a good time to stop reading before I go any further, come back after you've seen the movie.

I see some of my favorite movies annually, sometimes repeatedly throughout that year, one of the few comedies to earn such a status, is Walk Hard, yes the box-office failure of 2007 may not have garnered much of an audience, but it is one of my all-time favorite comedies. When it comes to comedy, I won't say that I don't enjoy much, but I will say that comedies featuring characters aware of how silly they're being tends to be the worst the genre offers; for example, isn't it annoying how most parodies these days feature characters smirking at the camera when something stupid happens? See, I prefer most comedies to feature characters playing it straight, taking the world seriously, despite the humor all around, not comedies, where the characters know they're just doing bits, or reacting in ways that show they're aware of how stupid their subject is, that kind of cynicism just ruins the joke, which is what I love so much about Walk Hard. This movie balances everything silly perfectly with everything serious, in a way that seems impossible from most comedies, especially parodies in recent memory, sure Dewey Cox losing his sense of smell is stupid, and makes no actual difference to his talent, but it doesn't matter, Reilly delivers a performance that shows how devastating it is, while we laugh at how absurd it is once that absurdity clicks. We laugh, but we understand there is an actual issue at play, which then makes us laugh harder, upon realizing the severity of the problem is not as severe as the actors are selling it.

Walk Hard is by all means an over the top comedy, yet the approach they went with, which the actors committed to, is much more subtle in the delivery, so what would normally be this extremely loud comedy, is surprisingly more quiet, more subtle and slower than it normally would be honestly. I'm not sure how director Jake Kasden achieved the tone of this movie, but he did, the result is a comedy that feels relevant to this day, we still get endless "Oscar-baiting" biopics, a lot of which follow the same template this movie mocks, seriously, pop this one in during the awards season between movies, the laughs become that much bigger. One of the best running jokes of the movie, is also one of it's more subtle jokes, which is the characters always referencing their age whenever time moves forward; it honestly took me a few views to fully pick this up, which might sound like I was being stupid, but the way the actors deliver the lines, makes it more subtle, especially as we are more focused on either a different joke/subject as this all goes on, so while you might be more focused on Darlene (Jenna Fischer), stating she's not as beautiful as she once was, she's also continuing the joke by given us a specific age, which is a clever way to mock biopics that take place over the course of years.

Of course, everyone's favorite gag in the film is how Dewey finds himself addicted to drugs over the course of the film, is it silly? Sure, but the way Tim Meadows delivers it just kills me every time. Drug addiction is a common source of tragedy, in fact it's a common piece of information biopics exploit for anyones "downward spiral", here played for laughs, but that joke has a lasting power because of how well delivered it is. Most movies that deal with drug addiction often make the drug look bad to us, which won't matter when the lead inevitably uses said drug, despite all the obvious signs that should signal it's a bad idea, so it becomes funnier to see the person warning Dewey about the drugs, to warn him in ways that sound more like his promoting it before the eventual abuse, honestly I never get tired of the gag.

So, why is this my favorite comedy of the past decade? Why not 22 Jump Street? Which rightly mocks sequels in a manner so perfect, or This is the End? which is so insane with its premise, that the jokes rarely stop. I like Walk Hard as much as I do, because so much of it is just perfect, the jokes are broad enough to work in a variety of ways, the tone is perfect in it's insane but heartfelt approach, the characters are all fully realized, even when they're one-joke characters (Dewey's dad is a parody of pretty much any biopic father, so his main lines are just expressing his disappointment through repeatedly saying "the wrong kid died"), and above all else, it's just really funny, and continues to be funny as we continue to see the exact movies it mocked get made, over, and over again.

The dedication to making this look and feel like an actual biopic is just astounding, aside from Reilly and Kristen Wiig playing their teen selves (a funny joke, even if you're unaware of what it's lampooning), the make-up work to make everyone look different as time goes on is pretty amazing. The make-up though, is nowhere near as impressive as the music, Dewey Cox feeling like an authentic singer of the time is probably the film's greatest accomplishment. A big part of why the film remains relevant for me, is the music, which I still play every now and then from my playlist, the effort and dedication to make it sound real is a highlight not commonly found in comedies. Do a lot of the songs have comedic lyrics in them? Yes, but they're often toned down, or played in just the right way to make it feel real, after all, plenty of novelty songs exist, especially ones that were hits in the past. The authenticity of the music and the effort to make this look like a biopic, make the film serious enough to laugh even harder about the whole joke, which is a feat I  admire.

So does the movie always land? Not entirely, there's still some jokes that don't hit quite as hard, like Cox's name, sounding like Dewey COCKS, which to be fair isn't brought up much, but it is used enough times to notice, it isn't annoying, but it never becomes as funny as the writers probably intended. Of course the joke I imagine might not age well, is the Jewish producers; I don't think this is the most offensive thing around, nor did this movie ever garner much complaints over it as far as I know, but considering their appearance is very stereotypical it clashes a bit with a film that is very straightforward in most of it's humor, which is made even odder, considering the characters don't act stereotypical beyond the look and accent; I'll admit though, I still laugh about the Jewish producers being portrayed as Rabbis, I just don't think the joke lands as well as pretty much everything else, and I wouldn't be surprised if it's looked down upon in the future as a bit racist.

Despite the misfires, Walk Hard:The Dewey Cox Story is just too damn funny, and I still think its approach to comedy, along with its dedication to mock "Oscar-bait" biopics is the kind of combo that makes it the best comedy of the last decade, it's original, while still perfectly capturing the tropes it intends to laugh at. Whether it's mocking miscast actors, mocking classic songs, or just mocking film, the movie is perfect and deserves a bigger following, Walk Hard is simply the best comedy in years and it'll be hard to find one that impresses me as much as this did.

Did you enjoy this? Please support me on Patreon for more.