I think I've found a contender for the year's best film. 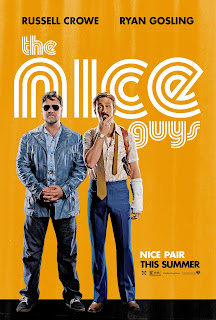 It's always hard to talk about an original film that you really love, especially considering ones that are filled with twists, largely because you mostly end up just repeating "this movie is fantastic, go watch it", but I will attempt to sell you on this anyway. I loved The Nice Guys, it's an amazing movie that feels like it's too good to be true in this Summer season, but it is. Original films are hard to come by, and even when they come by, there's no guarantee that it'll be good, so it's refreshing to see a movie that is this good, while also being an original piece, and on that account, I recommend watching this, even if you've never seen the trailers, in fact it's best to not see those trailers.


I never make too much of a big deal regarding trailers, especially considering that future viewers probably won't see them prior to watching, but man did the trailers ruin this. I really have to point this out, EVERY.TRAILER.SPOILED.THIS. Every major plot point was given away in the trailers, and it... Didn't hurt the movie, but it sure did make it annoying to know the details ahead of time. Basically, I hated the spoiler filled marketing, but I loved the film regardless, but if you want the best experience skip the marketing material.

Now that you've skipped the marketing, here's what you should know, Russell Crowe and Ryan Gosling are amazing here. I think a good sign for any movie is when I want to see sequels, and trust me you'll want to see them after this movie hits also, the timing and comedy between the two leads is perfect in ways that are best left experienced. There's also some fun with the supporting cast, especially in Angourie Rice, who plays Gosling's daughter, who as it turns out is more competent than her father, hilarious stuff. Everyone plays well off each other, and it's hard to deny that, especially throughout the movie's best material.

The best stuff is in the details, sure there's a lot of fun action here and there, but the reactions, dialogue and humor are all great, especially the tiniest of details in the visuals. Without giving much away, one of my favorite things about the movie, is that no one is safe in this, even if the bad guys miss, their bullets are guaranteed to hit someone in the area, it's a fun detail that kept me engaged throughout the movie. The movie just moves along the story at a nice consistent speed, which makes it all the more comforting upon realizing that whatever was the point of the main plot, means nothing to the leads beyond it just being a job that both are doing because... Because they happened to get mixed into the story. I like movies where the leads have no real interest in the actual plot, even when they're involved, it's a human element that is rarely seen in fiction, not giving enough of a shit to really care about things you have to do regardless of you lack of care, it's pretty amazing.

Like I said at the start, it's hard to review things I really like that are original, there's little in the way of negativity, while there's not much comparison to be found in other works. This movie stands perfectly next to other film-noir classics, and I expect this to be placed among the classics as the years go by. The Nice Guys may just be the best movie this year has offered so far, please don't skip it.