Is this the best videogame movie ever made? Look the bar is low, so it's not like it'd be hard to pass anyway. 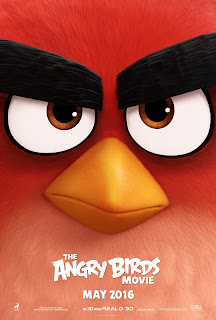 Everyone seems to be passing over this one, not for its quality, but because it's a movie based on a smartphone game; which kinda sucks, cause the movie isn't bad honestly. The Angry Birds Movie, the latest videogame adaptation to hit theaters, is an odd creature, which it pretty much had to be, after all, how does one turn a game about flinging birds at pigs into a cinematic tale? Turns out, just make that a bizarre comedy, in which the slingshot is their only means of storming the pig kingdom for a pretty fun climax... That surprisingly works.

My biggest point here, is that for whatever it's worth, Angry Birds being good or bad, depends less on whether or not you like the games (for the record, I've played it, enjoyed it in small doses, but can't say I'm much of a fan) and more on whether or not you can accept that you're watching a movie with very little real world logic. I basically liked it, but I understand if others don't, the movie just took a game with little in the way of story and basically said "okay but how can we make a funny movie that checks off the things people know about this?" I understand, the bulk of your enjoyment will come from whether or not you think any of this is funny.

The downside of movies like this, is that the heavy reliance on comedy brings two issues, do the jokes always land? And does the movie stop to just make jokes for the entire running time? The answers being no and yes, some jokes are too bizarre too effectively work in any context, others aren't well told, while some jokes prolong the story, though to be fair some were hilarious. Like I said, you'll either enjoy the absurdity or dislike, and that's okay, for me, I laughed more than I didn't; on the other hand, part of the problem is that the movie has a noise problem. Angry Birds is determined to be a loud, absurd comedy, which means the movie rarely, if ever stops to have quiet moments, I don't think that hurts the movie badly, but it does get tiring, even when those noisy moments make me laugh.

If there's one thing this movie is spectacular in, it's the animation, which I think most people can agree on, the animation on display is gorgeous. The whole movie looks like a classic cartoon rendered in 3D, it's fascinating, and makes the physical jokes land much harder. Of course, the animation really shines for the climax, which is as mentioned before, a cinematic version of the actual game, sling bird there, see bird powers, it sounds bad but trust me it's fun and well implemented into its bizarre story.

As for the film's cast, everyone does a commendable job, that's not to say they're fantastic, but they're  fun for what it's worth. Red (Jason Sudeikis) is a decent lead, Leonard is bland villain, made a bit more enjoyable by a good Bill Hader performance, Bomb (Danny McBride) is fun, Chuck is a real stand out, largely because the animation mixed with Josh Gad's voice is perfect, but Sean Penn as the huge Terrence(for some odd reason) steals the show with the movie's funniest gag; other characters include Maya Rudolph's Matilda, and Peter Dinklage as the pretty fun Mighty Eagle. I enjoyed everyone, even if very few were amazing here, the actors gave their characters some fun performances.

Is The Angry Birds Movie the best videogame movie? Yes, even if that doesn't mean much, it's still pretty amazing for a movie based on a game that makes games like Call of Duty look like Oscar worthy storytelling. It's a fun movie more often than it's not, though it does skew younger, which is by no means a bad thing on its own, give it a watch and decide whether or not you can get on board with the absurdity.