HOWARD THE DUCK IS MY FAVORITE COMIC BOOK CHARACTER-NO SERIOUSLY

I love Howard the Duck... yes I am sane. 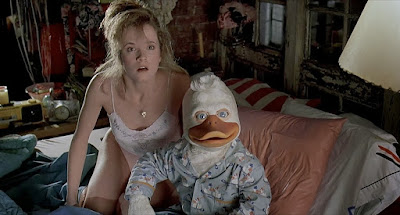 Are you still here? Really? Okay, so yes, my favorite comic book character is Howard the Duck, not just Marvel, but in general, I LOVE Howard the Duck, as a character and there's no shame in that. I can just imagine the expression in your face, to be honest, that probably would be my reaction ten years ago, even I can't believe that Howard is my favorite character these days. I'm not gonna act like the character is perfect, nor am I gonna act like his movie is some misunderstood piece of art (more on that later) but Howard remains more entertaining than he has any right to be in a world of super soldiers, sorcerers, teen heroes, gods, and so much more. Simply put, Howard's odd, yet human element to Marvel makes him my favorite character, which makes him kinda perfect in my eyes. 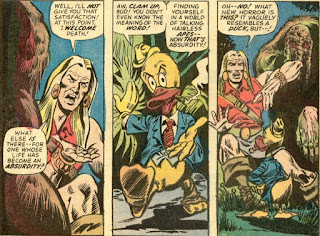 So let's talk a bit about Howard's place in Marvel lore, I won't detail his history, that's probably best suited to another post all together, but to understand Howard, we must know at least some basic information, like, how he's a duck from a different universe, pulled into the Marvel Universe; or like his first appearance being in a Man-Thing comic way back in 1973, which eventually got him his own comic series in 1976. Howard's made quite a number of appearances since then, most famously as a supporting character on The Sensational She-Hulk; Howard's most interesting change after his original run however, was after a strain between his creator, Steve Gerber and Marvel, would lead to the Howard we'd follow in the Marvel Universe for years to come, to be a clone, while the real one was over at a different studio, yup strange, but best explain elsewhere. In recent years, Howard, has regain some popularity after a brief cameo in 2014's  Guardians of the Galaxy (which I somewhat predicted), resulting in a new ongoing series, that was quickly cancelled to make way for a new ongoing series featuring the character, with the same creative team... I know confusing. Within all these decades, Howard's taken many roles and jobs, had multiple female companions, proven he's more than capable of fighting alongside Marvel heroes, and at one point even fought against the Marvel Zombies, Howard is a character who's done it all, while somehow, still remaining as a fairly obscure minor character in these comics overall, it's pretty brilliant in a way. 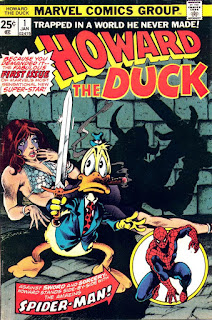 Okay, now that you know some basic information, what exactly got me into the character? Honestly, it was his original run, which I began reading a couple of years ago, surprisingly, I truly loved it. Let me back that up a bit, yes, his original run is what got me sucked into the character, but I knew about the character prior to that, I can't remember exactly how I learned about the character, but the closest I can think of is seeing his movie get trashed by multiple critic sites. Whenever it was that I learned of his existence, one thing was for sure, knowing Howard was a Marvel character IN the Marvel Universe fascinated me, why a duck? Especially one so cartoony in a world of humans? The answer never mattered, but knowing that made me smile. I remember the first comic I saw the character in, it was as a background character in Secret Invasion, his appearance made me smile, I guess he just always stuck out for me in that way. For years, Howard, was a fascinating Marvel character to me, so when his original run made its way to Comixology, I decided to give it a shot, and well, I was hooked, I decided to read every comic I could get my hands on with him, and while I've yet to read all, I am not planning to stop anytime soon, it's almost become a goal for me to read everything. 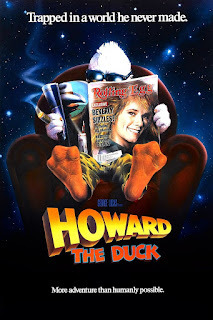 So let's talk about the movie, the first Marvel movie, the one that many claim to be among the worst movies of all the time, Howard the Duck, brought to us by George Lucas, the one I find to be incredibly... Decent. Yes, Howard the Duck is no masterpiece, it's incredibly flawed, but it's pretty fun when it can be, I also think it is pretty funny at times, also the portrayal of Howard isn't awful like the recent portrayals of the Fantastic Four and Superman among other awful adaptations, in fact my biggest issue with the film is that the third act lags an awful lot. I don't know if this movie is considered awful because everyone is seeing things I'm not, or if it's just cause it's an easy target given its status as a bomb, as well having Lucas' name on the movie, but trust me, there have been worse films, comic adaptations or not, and the degree of hate this gets is unfair, even for someone who doesn't consider this movie to actually be good to begin with. Do I think Howard the Duck deserves a re-evaluation? Yes, but only because I wonder how people will react to this movie in an age with so many comic book movies, also if they will still consider it amongst the worst knowing how bad we've gotten with some since then. The silver lining in all of this is Howard's return to the big screen 28 years later (and it was exactly 28 years later), which was much more welcomed by audiences, it was a fun little post-credits bit, that I predicted would happen (though admittedly in a different fashion), strange but I guessed it, maybe Howard will get a real second shot at this someday, I hope. 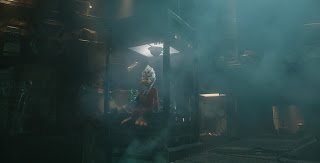 So, why do I like Howard so much? I've given you a bunch of other information, but nothing that explains why I love the character so much, which is to be honest, hard to pin down, but I'll try anyway. Howard is a loser, he's got a bad temper, and is only special in the Marvel Universe, because he's a talking duck that acts human, in this way, he is more relatable than a majority of comic book characters. I honestly don't think anyone in the Marvel universe is more relatable than him, he doesn't fight crime cause he wants to, but because people expect him to and despite his nature, he's not mean spirited enough to deny doing the right thing, he is a hero because of his appearance, not because he wants to be, Howard is like most people in real life, but because he's also a duck people treat him like he's supposed to be more, even if that's not true. Howard the Duck works for me, because he's Marvel's excuse to make a normal person a hero, by just making him look odd, or rather, make him a golden age animation duck, without the near invulnerability that comes with most cartoon characters, as well as the outlook on life of a loser in an existential crisis. I'm a big animation fan, the pairing of a character that would fit with the classic Disney shorts, and the comics I love, is just too much joy for me, the odd pairing is just perfect. Okay, so entertaining, a winning combo of toon and comics, and Howard being incredibly human, despite being a duck, what else?  Well honestly, I'm a loser, a dork, the guy that was usually picked last, etc. I enjoy Howard, because in many ways I am Howard, I mean not seriously, in fact I doubt I'd enjoy Howard as a real person, but the way he's presented, and the way he acts, is all very reminiscent of myself in a way. I like Howard so much, because he feels like a character made for me, which isn't common. 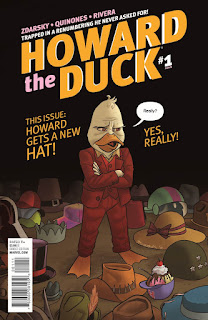 Thank you for reading my 200th post, I hope to provide better content as I continue, but I also hope you continue reading, thank you and please continue supporting me.