The Big F***ing Giant! OK, now that I've got that out of my system, on to the review! 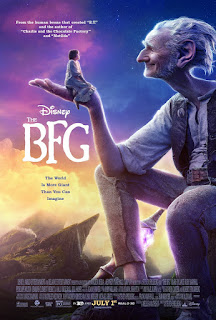 Steven Spielberg is arguably the greatest filmmaker of our time, yes,  not all of his films are perfect, but it's hard to find a person who can say they come close to his success. Spielberg is by many known as one of the most whimsical filmmakers of our time, a maker of dreams if you will, which comes to no surprise when seeing The BFG, a story about a kind giant who creates dreams, it's a perfect fit for the famed director, one that ends up being as good as it sounds. I find it rare to see live-action "kid films" work, especially now, so I'm glad to see this one work, it's a slight but heartfelt tale that succeeds on its goals and I can't be mad at that. In the hands of Spielberg, this movie is probably among his weaker work, but it's better than some of the best work of lesser directors, yes, Spielberg just is that good at his job.

I'll be upfront, I've never read the original book this is based on, I've heard this follows it well, but please excuse me if I make any inaccurate comments here.

Roald Dahl is a fascinating author, I've read more than a few of his stories and love almost every adaptation of his work, so yes I was looking forward to this movie. I mainly knew The BFG as that story I liked being immature about, specifically on the title, and while I do not regret saying childish things, after watching this, I'd probably tell myself to knock it off quick, because this is genuinely too touching to be mocked like that. I can't believe I'm saying this, but even the fart jokes in here are charming, I'm not sure if that's because of Spielberg, or Dahl, or both working well, but the fact that the fart jokes come off sweet here show a level of charm that can come from one master storyteller working with something wonderful from another master storyteller.

This movie works more as a series of vignettes, sure they're good vignettes, but there's not much to them beyond being sweet, which is fine, but it does leave the movie feeling hollow, still it's not a bad kind of hollow. As we see our leads, Sophie (Ruby Barnhill) and the BFG (Mark Rylance) go through a series of adventures, we see the two learn a bit about each other, resulting in some sweet moments reminiscent of E.T. which is charming, especially in the visuals.

I hope this movie receives some recognition for its effects, I found myself amazed every time the BFG appeared on screen, I don't know how often that's happened with a CG created human (or giant here I suppose) but trust me this sets a new standard. My two favorite sequences in the film both have the effects on display, one involves the giant running and hiding from humans (this has to be among the most creative sneaking around scenes ever made), while another involves Sophie and the BFG catching dreams, it's beautifully fun stuff to watch. Of course we also see nice effects with some of the other giants in the film, most of which appear more cartoon-like than the main giant, but they're all effective all the same, which just adds to the charm of the film.

As said before, this is not an especially deep film, but it's got a lot of charm, especially with the leads. I know this movie failed to attract audiences, but I think it'll gain a fanbase as the years go by, not because of Spielberg's pedigree, or Dahl's for that matter, but because it's a charming innocent film. The BFG is not Spielberg's best, but it is one of his more charming films in recent memory, you owe it to yourself to watch something as sweet as this.