So let's be real here for a bit, Sony's marketing team REALLY dropped the ball on this one, personally I didn't hate the trailers, but I understand why some others did. I say some, largely because I know most people who hated these trailers online were, in all honesty, losers who were just pissed that women got to star in the film. If you hate this movie after watching it, fine I understand, different opinions and all, but if you hated this before watching, went out of your way to rage endlessly at the actresses, demanding male leads, or whatever else relating to that MRA crap, yeah you suck. Anyway, let's review the new Ghostbusters, the faster I praise this, the quicker Disney, I mean, Sony, I mean Fox, I mean... No one is paying me. 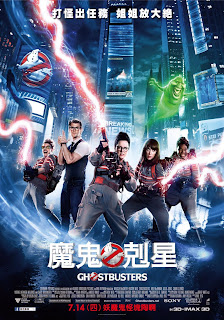 Just so we're clear, my opinion here is my own, it's not a paid review and what I feel here isn't to please feminist women, I'm being truly honest, of course I have to say this, otherwise some trolls will call me a liar or whatever they consider an insult now. I really like this movie, Ghostbusters 2016 is a solid comedy, not as great as the original, but a good sci-fi comedy in its own right, but look whatever I say won't matter to certain groups of people, so why even bother? Well because I can, and I feel people should stand up to hate, the groups against this movie existing, hate seeing women in lead roles, sure not all do, but most do, so my screw you to them was watching the movie; I honestly enjoyed it, so consider my review another fuck you. I know most people will believe I'm building this up to knock down hate, but the truth is I would have enjoyed this regardless of the online trolls existing, though I probably have to thank them for convincing me to watch this, sure the trailers weren't good, but you know what after the unwarranted hate I wanted this to succeed, even if I didn't like it, hell, we have a bunch of shit Transformers sequels, what would this franchise do? Well after watching this, this franchise can entertain me, please give this a bunch of sequels, they have the potential to be really fun if we follow the team here.

In the original film we had Egon, Ray, Venkman and Winston, this time, we have Abby (Melissa McCarthy), Erin (Kristen Wigg), Holtzmann (Kate McKinnon) and Patty (Leslie Jones) a worthy team to follow. I can't stress enough how much I love the new team, I want this movie to get all the sequels they want just to see more of these awesome women, the talent on display deserves your support. Abby pretty much holds the team, while I worried early on that she would just be used for fat jokes, the movie does well in making her an actual character, so much so that a running gag involving her poorly delivered take out soup comes off funny, rather then typical. Wiig's Erin pretty much serves as our lead for the film, making her the audience's POV character for the most part, she works, bringing a lot of the film's heart with her, but I especially loved seeing her interest in Kevin, the Ghostbuster secretary (Chris Hemsworth), largely because it felt more realistic when compared to other movies; sure the joke is that she finds Kevin extremely attractive, but how many times do we see women in roles were they are attracted to hot guys, but are also still real characters? Not often as far as I can tell. Of course I can't talk about this team without bringing up my favorite of this team, in fact, scratch that, my new favorite Ghostbuster across all the movies, shows, etcetera, Holtzmann, a bizarrely fun character who feels the most human despite being the most over the top, even if all of her jokes didn't land, Holtzmann charmed me and in some ways felt the most relatable to myself, however strange that may sound. Finally, there's Patty, while Holtzmann is my favorite, Patty was the one to give me the most laughs in this film, sure it sucks that she isn't a scientist, but she's competent in so many other ways, including being the history buff of the team, which makes her (in my opinion) a better "fourth" Ghostbuster than the original's Winston, and I loved Winston in the original. At the end of the day, I loved both teams, but I hope this one gets to appear in more than one good movie.

I've heard many people disliking the film's villain, I stand somewhere in the middle with Rowan. The idea of this film leaning on some internet-esque dork as the villain works, in fact the execution is good for the most part, I just wish there was more. If there's one thing I can say about Rowan is that we never see the movie take full advantage of his character, maybe if the writers knew the full extant of the hate this received online he would've been given more material, but as is I'd be lying if I said I was bothered by him, I just would've preferred more of his geek issues being brought up to really nail why these kinds of losers are toxic and do not represent other geeks (which the movie barely touches on), either way he's a suitable enough bad guy.

My biggest issue with this film lies in the improv, sure some of it works, but a lot of it drags the movie, not enough to bore me, but enough to make the whole thing feel a touch too long. Outside of that most of my issues with the film feel minor, for example a big reason I think this movie doesn't reach the levels of the original is the similar plot, sure it's done differently enough to stand as its own thing, but the structure made it pretty easy to figure out when certain beats would happen, which didn't help with the improv extending the road to those beats. Of course there's also the mixed bag of cameos here, sure the appearances of the original cast is fun throughout this movie, but some of it feels forced/unnecessary. Bill Murray in particular felt very odd in this movie, you think he's gonna be this major character, then he isn't which makes his appearance all the weirder, in fact the most well done cameos are oddly enough Harold Ramis (yes, he appears despite being dead, it's a nice touch) and Ernie Hudson because they don't feel like the movie is stopping just to show them off. Of course if you're gonna ask what the best reference to the franchise was, that's easy, Slimer, seriously there's a lot of fun to his appearance, I just wish more of the references and cameos were placed as well.

I guess in the end it doesn't matter how much I praise this movie, in some circles the passion to hate will just be too strong, but I don't care, screw the people who are just hating this movie for starring women. Much like our heroines attacked a giant ghost directly in the crotch, the boys online feel a direct attack on their nuts, good, if a movie makes you reel in so much pain before even watching the movie, just because it stars women, you deserve to be called out. Ghostbusters is a perfectly good reboot to a classic, sure it may not match up to the classic, but after a great post-credits scene, these women need another go at the role, especially they're a fantastic team. Online trolls? You were wrong, go back to your cave until you learn to be kind, this movie doesn't need you to be proud to be good, it only needed a solid team.

Did you enjoy this? Please support me on Patreon!