IS DETECTIVE PIKACHU A GOOD IDEA?

A bit late, but I got a few things to say about the news surrounding a Pokemon movie, yes I'm talking about Detective Pikachu. 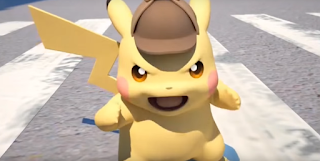 Pokemon has been big since the 90's, but as a franchise it never quite reached the heights of its early years, at least not until recently. Pokemon Go is a HUGE hit, it's not only attracting fans of the original cartoon/game, it's attracting people who were never into it to begin with, that's impressive. Moving along, due to the popularity it was inevitable a studio, Legendary, would buy the rights to make a live-action Pokemon movie, their choice? A movie not based on the show, the games in the main series, not even the comics, no the movie is in fact based on the recent Detective Pikachu game, such an oddball choice, yet I like it.

I'll admit, my first thought on this movie was whether or not it'll play less like a Pokemon movie and more like Ted, but for kids. As time passed, I gave it more thought and I realized it could be a pretty good idea, even if it's not my idea of a great Pokemon movie (which I won't share because it's my idea), so yeah I'm onboard. Yes, Detective Pikachu sounds a bit wacky, but it stars the franchise mascot, allows a big name to voice the famed Pokemon and still promotes the friendship between people and Pokemon, in fact since Pikachu is solving crimes, the "Gotta Catch 'Em All" tagline is appropriate but in a different way.

The interesting thing about going in this direction, is that it avoids a core feature of the games that some read as problematic, the battles. Do I expect some action in this movie? Absolutely, but given the nature of it, I doubt you'll see Pikachu taking orders to fight. I don't see the fights as an issue mind you, but the idea of people ordering their pets to fight does come off wrong to some non-fans and can be problematic to a bigger audience, especially in a live-action film, to the point that it wouldn't surprise me that it's a reason they chose to make this film. Would I like to see a live-action Pokemon movie feature the battles as major parts of the story, sure, but it doesn't surprise me that they want to avoid it for now.

Despite everything else, to me the biggest surprise is not using Pokemon gyms, Leagues, or the whole adventure in the wild thing as a whole. I understand, after all, those things make it all too episodic for a stand-alone feature to properly showcase, but it will feel strange to see Pokemon's first major live-action movie to be set in a city for most of it's runtime. I suppose a good story and an entertaining cast can make up for the lack of an adventure, but to me that may end up being the biggest hurdle, is Pokemon still entertaining, if there's no adventure? I do hope the answer is yes.

So, is Detective Pikachu a good idea? It's hard to say honestly, I feel there's potential there and it has most of the necessary beats to be a proper film to the franchise as a whole, but can Pokemon even remain to be Pokemon when there's no roaming across great lands? I guess we'll find out. I will say this much, I'm glad they're doing this and not an adaptation of the anime, which if we're totally honest has only gotten worse and wasn't very good to begin with, sorry, going back to your childhood can show you the flaws you forgave easily as a kid. On the whole, yeah I guess Detective Pikachu is a decent idea.