COME AT ME GHOSTBRO! I'M WATCHING THE NEW GHOSTBUSTERS

I want to see the new Ghostbusters movie and I hope it's good; why is that so controversial to say nowadays? I know the trailers have been less then perfect, but given the directors track record and the talent, yeah this may be a great fun time, so forgive me for not caring what the online geeks think about this. 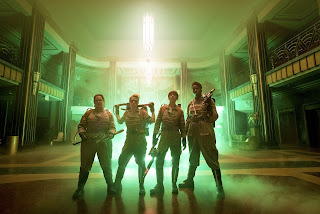 Before I really get into the meat of this I'd like to say one thing, the haters have done more to convince me to watch this, than anything else surrounding, even if this movie wasn't getting praised, I'd watch just to give a big fuck you to the legion of toxic fans of the original.

I love Ghostbusters, it's a great comedy that plays with the horror genre really well, despite that, I am in fact sad that it never became the franchise it could be, sure it had a fun show and a great game, but the movie sequel sucked and the other show was really bad as well; so when news broke out of the reboot I was hoping this would finally become the franchise I knew it could be, the answer seems to be maybe. I wanna be upfront, my biggest disappointment in the new movie is the fact that it is a complete reboot, I was hoping this would continue from the originals, with the company having expanded since we last met our heroes, it isn't, oh well I moved on. If there is one thing I ask this new team is to consider expanding the business, do the one thing the originals failed to do, after all it's not like ghosts only exist in one city.

Moving on, I understand the fans who wish not to see this because they don't find the ads funny, BUT it gets hard to believe you don't have an issue with the gender when you decide to insult the cast (seriously? Guys be decent don't call them bitches), or complain about some "feminazi" conspiracy, you're not helping your case. I get it, sometimes movie look like shit, I didn't want to see either Spider-Man reboot, but you know what, I didn't launch a hate campaign, I didn't attack the fans (some of which went as far as to insult the superior original trilogy), and I most certainly wasn't acting like my hatred of it was some righteous act against Hollywood. It's okay to hate a movie, but don't put down others who want to see those movies, don't put down children or people who're happy seeing themselves get represented, and fuck you if you think you're view is the only one that matters, your Ghostbusters won't disappear when this one appears, nor will it kill you to let this movie happen. I'm okay with this existing and if I dislike it I'll be okay too, if it sucks people will forget, so why throw a tantrum on this level? Just cause you hate seeing women in roles known for men, at least own up to it.

I hope these toxic fans are shunned once everyone sees it, which judging by the reviews, they will be. I'll admit I believe some critics are probably been soft on the movie, but I doubt the critics liking the movie are being dishonest about their enjoyment of the film, and I know they aren't getting paid to like it (seriously guys, stop with that crap), all these arguments are coming from idiots who can't stand seeing critics disagree with them, well boys, you can whine, but your opinion isn't the one worth listening too.

I am baffled by the hatred (though I understand why these morons do) the new Ghostbusters has received, fine you dislike the movie, but you didn't go this far with RoboCop, Ben-Hur, Spider-Man, Total Recall,  and whatever else, granted I wouldn't wish this on any movie, but the double-standard is apparent. Trust me, even if this movie sucks it won't be close to the level of suck that is Batman v. Superman, I mean at least this movie isn't shitting on the legacies of beloved superheroes, at least this movie has some love for the franchise it's expanding on. I hear you whiners now "Batman v. Superman didn't suck, this piece of shi-" SHUT THE FUCK UP! Fine, you can enjoy that movie, I won't take that away from you, don't take away my hate for it, don't take away my curiosity for the new Ghostbusters and stop trying to "convince" people your opinion is the smart and right one. This movie didn't become a battlefield for feminists until you decided to complain, the irony, the movement you hate is heard more when you try silencing it.

I think this movie has potential to be great, some of the clips look cool, others look pretty funny and the cast is talented, so yes I want this movie to succeed. I want this movie to become the great franchise the original never truly became, but what I want most is for the sexist haters to feel shame, to be hit with a cold reality where the movie they hate is one of the biggest hits of the Summer. I'm watching this movie because I'm secretly an evil feminist out to kill your manhood, hide you cocks, they will be destroyed you sissy man-child.

Did you enjoy this? support me on Patreon!