CAN THE NEW GHOSTBUSTERS BE BETTER THAN THE ORIGINAL?

Yes I'm strictly talking about the franchise created by Dan Aykroyd, not the old show with the gorilla, please don't correct me, just hear me out before you attack me. 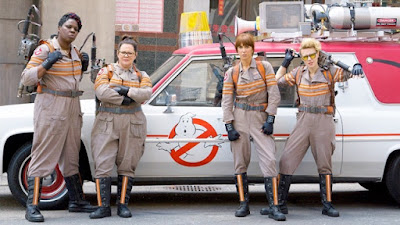 Alright, Paul Feig's Ghostbusters has been out for a week now, it's a solid comedy and takes the franchise into a good direction, even if some aggressive fans would rather it not exist. Personally I never minded it, sure it could've sucked, but so what? We've had crappy remakes before, why make a fuss for this one, especially considering that with the exception of Slimer, none of the original characters appeared in this one, if it sucked it would be easy to sweep this under the rug is my point, but it didn't suck is also my point.

Before we go any further I'd like to point out that yes, I do sincerely like the movie, I'm not just saying this to score "feminist points" or whatever jerks online say. I didn't like Pixar's first female driven film (Brave), I hated Fifty Shades of Grey, I never understood the appeal of Jupiter Ascending  among women (which includes feminists) and I still don't after having seen it, so my opinion isn't swayed by "feminist approval"  okay?  I know saying all this won't change the minds of the Ghostbros, but I'll say it anyway to be clear. Anyway moving on from being upfront about my opinion on the movie.

While I think the 1984 Ghostbusters is a classic that is superior to the new movie, I've slowly begun thinking about the possibility of the new movie becoming better overall in comparison. Sure, the original is a great film, but the sequel was nowhere near good, the first cartoon was good in its first half, bad in its second and the second cartoon was awful, so forgive me for saying this, but the new Ghostbusters has the potential to be superior as a collective whole. I know it sounds strange, but if we do get a decent sequel out of this, along with some fine spin-offs I'd say this is the better Ghostbusters team, even if the original film remains the best because this team would at least be responsible for a franchise that was consistently fun, versus the original which never caught the full potential of the universe it wanted to create. My point here is the quality of the original film may be superior to the new film, but if the new film creates a series with consistent quality, then this film and team will be remembered as the better team regardless of quality, it kinda hurts to admit given how much I love the original, but I'll accept it.

The reality of the world will always be more important than the "facts" of critics, sure I like to see the opinions of critics and find them to be helpful more often than not, in fact I consider myself one, but the truth is what we deem to be the best movie, won't matter to the public; Citizen Kane may be the best movie according to plenty of film critics, but Star Wars will always mean more to the world, sorry.

Ghostbusters (84) is better than Ghostbusters (16) but to the kids of today, Erin, Abby, Holtzmann and Patty will always mean more than Venkman, Ray, Egon and Winston, the girls growing up and maybe even women will especially remember this new team more fondly. What's especially sad is how much older fans of Ghostbusters tried ruining the franchise, sure I understand the frustration of seeing something you like being remade, but the second it was made clear these were all new characters unrelated to the original team, you should've stopped making a big fuss, but instead a lot of you went overboard and horribly sexist in your attacks. This movie didn't erase your film, it would be easy to forget if it was as horrible as you thought it would be, and even if you couldn't it at least doesn't tarnish the original team, in short, STOP BEING CHILDISH BRATS AFRAID OF COOTIES. Guys, Ghostbusters is currently being more inclusive than any other major geek movie franchise, we should've welcomed these incredible women, we should've been accepting of girls and women wanting to join the fandom, we should've been fine with Ghostbusters being inclusive, rather than complain we should've cheered them on, instead this positive, forward thinking franchise will be remembered for having one of the worst fan bases around;silver lining, the girls growing up with this will fondly remember this as the moment they wanted to be scientists, action heroes and everything else that generations of horrid men have deemed "wrong" for women. For most girls, this franchise will be the first one to put them in the front lines, not DC, not the MCU, the Ghostbusters franchise, which in a way makes this new team better than the original, this team can inspire a lot of girls to be better people, versus the original team which while great, sent an inspiring message of greatness to boys who were already being told that by hundreds of other movies.

Also lets be real here, if the two teams fought, the women would kick the asses of all the men, why? Look at that climax and all their weapons, clearly, if we're being childish the girls would beat the boys, get over it.