Look at who's back for another season, 90's sitcom star BoJack Horseman finds himself on the road to the Oscars, while the viewers get ready for more depression. 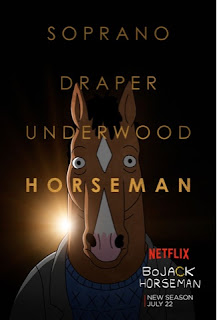 I love this show, I REALLY LOVE, this show, I've been hooked since season one, season two kept me interested, now, season three has made this my favorite Netflix show. BoJack Horseman, is the kind of show that continually evolves the story, without losing the source of its humor, depression. I don't think depression is funny, I've suffered from it, but I do think there's humor in the different ways we handle it; that's the beauty of BoJack Horseman, the main cast suffer from depression, seeing them all react in different, destructive ways creates a relatable but humorous show that covers a much more depressing one. Much like season two was more depressing than first, this season is more depressing than two, knowing that I'm almost certain this show will be remembered once it's over as the most depressing comedy to hit television.

There's a beauty in depression that's rarely seen by people, we question ourselves, try to understand who we are, the answer we create to that is how society will see us, regardless if it truly is us, we can be better people, or worse, the answer we create is not always positive, but it shows our mindset better than any other feeling, depression can make us the people we become. BoJack is relatable because despite the extremes he goes to in his search for happiness, we get it, we don't necessarily agree, but we get why he does it, as someone who has suffered from depression I can admit some of BoJack's actions remind me of myself, or at least some of the thoughts I've had in life. I'm not afraid of my depression, I'm afraid of giving in to the worst actions my mind conjures up as a result of it, seeing a show tackle the subject, while providing some humor is relaxing, and creates an emotional high no other show provides, a bleak joyless high that somehow provides joy.

Season three of BoJack Horseman changes it all up by examining the depression one can get from success, sure BoJack is an award nominee, but so what? Does an Oscar fill a joyless hole? It's a natural progression from the depression found during a passion project (from season two) , which itself continued from the first season's depression arc of trying to let go of the past. There's a lot to love in this new season, from the reoccurring flashbacks to 2007, the progression to BoJack's loneliness, a running gag to spaghetti strainers that pays off big and a near silent episode that is among the best episodes I've seen, not only in this show, but in all of the shows on Netflix. The highlights never distract from the show's depressing heart and that's what I love so much, even the happiest characters on the show now display sadness, sure Mr.Peanutbutter is always cheerful, but we can see that's hiding a sadder truth, even Todd seems to be growing into a sadder human being, a result of BoJack in his life? Or was Todd living with BoJack to ignore that he creates his own mistakes, which become easier to write-off when BoJack carries some involvement. There's a tightrope of sadness and joy being walked on by the series creator (Raphael Bob-Waksberg) and this show proves he is excellent at walking it.

Just so we're clear there are plenty of laughs to be had, even when the season reaches it's beautifully shocking penultimate episode, which features BoJack at his lowest since, well the penultimate episode of season two. Season three continues building on a lot of great running gags (Halloween in January anyone?) and creates new ones I loved (not hard to miss, but pay attention to BoJack's restaurant by the season finale, it's a nice touch) which I hope stick for season four. There's a joy in the sadness, which sounds absurd, but just fits so well in a show that is incredibly absurd, with the freedom of Netflix, is free to be that and so much more, a portrait that begins with little sense, turns hilarious upon further inspection and sad once you see what the artist saying through the humor, there's no show like it and it's hard to believe any show can be like it.

BoJack Horseman builds itself to be even more depressing and hilarious in season three, while it's content is absurd, the show knows how to balance that to create a powerful depiction of depression, how people react to it, and the destructive capabilities a well meaning person creates when they don't know how to react to their own issues. This is the best show on Netflix, you owe it to yourself to watch it, I know I will as I face my own depression.