I liked the previous two reboot films, but this is by far my favorite, if that's all you needed to know feel free to skip, otherwise keep reading. I hope you keep reading. 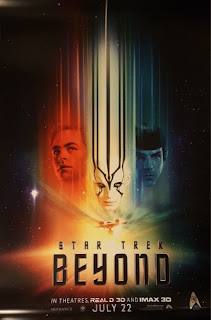 Star Trek, has always been known as the more cerebral counterpart to Star Wars, sure there was spectacle to it, but for many, the idea of big fight scenes destroys the series as a whole, which is what turned off plenty of classic fans from these reboots. I personally never had much of an issue with these movies, though I will admit there were weak points (the third act in the last movie falls apart), so I was interested in Star Trek:Beyond regardless of the hate the first trailer received, thankfully this not only ends up being better then the prior two films, it ends up feeling like a movie that would've been made during the classic show.

There's a lot to like within this latest installment, but to me the most enjoyable moments come from the pairing of Spock (Zachary Quinto) and "Bones" McCoy (Karl Urban) on the planet our heroes find themselves stranded in. A lot of the film's funniest moments come from "Bones" bickering at Spock, but what makes it especially effective is the heart at the center of it, we know these two are good friends, regardless of the bickering which makes it all the more charming.

Outside of the Spock/"Bones" team we see the Enterprise crew split up in other fun ways until the film reaches its third act. Captain Kirk (Chris Pine) and Chekov (the late Anton Yelchin) drive the main story as they wander the world trying to find the crew and realizing there's more hidden truths to their latest mission, Scotty (Simon Pegg) helps a local, Jaylah (Sofia Boutella) restore her home in return for her assistance, and Uhura (Zoe Saldana) with Sulu (John Cho) are captured by the film's antagonist (Idris Elba as Krall) along with the rest of the Enterprise passengers, all these story strands work to varying degrees, with the Uhura and Sulu scenes coming as the weakest. For the most part, the film gives all the lead members a lot of material to work with, but I'm surprised that it wasn't until the entire team was split up that this film series (specifically talking about the reboots) managed to make me invested in all the main cast members, versus the last two where I'd feel some of them were useless.

Of course the music in the film deserves some recognition in Beyond, trust me there's a lot to enjoy here. Michael Giacchino delivers a beautiful score that compliments some of the film's most wonderful visuals, but the stand outs for most people will be the "classical" music in the film. The film features an awesome sequence during its third act wherein the crew of the Enterprise flies by the ships led by Krall while a certain "classical" song is played, it's awesome and feels like a great homage Mars Attacks! I loved it, you likely will too.

Sadly the weak spot for the film is Krall, Idris Elba is a great actor, but Krall ends up being a pretty forgettable villain. Sure the twist with him is great, but outside of that I was never able to really feel threaten by him, which is odd given his superpower is frightening. I don't think most people will mind him, but he sure comes up disappointing among all the great stuff in this one.

Star Trek:Beyond is a fun film, the smartest entry in the reboots as well as the most touching given the nice tribute Leonard Nimoy recieves. It's not perfect, but the strengths make this feel like a classic episode in the best ways, go see for yourself.