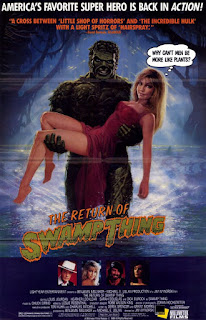 The Swamp Thing is back and brighter than before, this time he’s out to stop Dr. Arcane from stealing life, all while he falls in love with a vegetarian.

So Swamp Thing must’ve been a popular figure at the time right? I ask because I’ll admit my knowledge of the character is limited, but also because he got a movie, a cartoon, then this movie and also a live action show that ran for a few seasons, am I missing something? Not that I think Swamp Thing is bad, I can believe him being popular as an “underground” type of comic, like Howard the Duck was, I just have never heard it was the case. Anyway so we meet the Swamp Thing again, this time in a movie that still feels at home with low budget exploitation films (albeit more family friendly) but with a more comedic edge, many say this is the worse of the two movies, I think it’s the better one... Let me explain.

I didn’t like the original movie, I know it has it’s fans based on what I’ve read, but it mostly bored me. I appreciate Swamp Thing going for a horror approach, but so little actually went on that felt new or interesting that I just did not care. Going into this movie I expected worse, not necessarily more of the same, just worse, after all it has less of a reputation, it didn’t seem possible that it would be better, it is. The Return of Swamp Thing doesn’t carry that same tone as the original film, which does feel slightly disappointing, but it does have something worth more in my book, it’s entertaining.

Aside from lead actor Dick Durock playing Swamp Thing, there’s only one returning actor, Louis Jourdan as villain Anton Arcane, somehow alive again for reasons unknown pretty much. Taking in that much, it becomes no surprise that this movie barely acknowledges the original film, it mentions the backstory, but otherwise most can skip it to watch this. That the movie doesn’t connect much to the original is why I can recommend this to newcomers, it’s more fun and you don’t need to worry about being lost. Heather Locklear is a new love interest, playing vegetarian Abby, some may dislike her for her personality, but if you can laugh at how over the top silly her performance is, you’ll find yourself entertained like I was, it’s almost like a parody of superhero love interests at times. Sarah Douglas (yes Ursa from the Superman movies) is on board as well, there’s not much to her besides being the bad guy’s scientist who isn’t so bad, but she’s good at what she does. Mix that in with some cartoony performances from the henchmen and you got a fun movie, not great, but I won’t complain about dumb fun when it makes me smile.

Aside from the monster and mad scientist business, The Return of Swamp Thing squeezes in another sub-plot involving a pair of kids trying to take Swamp Thing’s picture for some cash. It’s about as ridiculous and non-consequential to the plot as you might expect, but again I laughed at seeing these two bratty kids bicker for a photo, while Swamp Thing humors them. It’s not even a well written sub-plot, much like the film as a whole, but fun is fun and I laughed, I wouldn’t complain about a good time, even if I know it’s not “right” for the source material.

This is not the best adaptation that could be made for Swamp Thing, it’s a very silly, dumb monster flick with low budget costumes and fights, but I was having a blast with it. The Return of Swamp Thing was a nice little surprise, bad maybe, but enjoyable to kill time with and I won’t complain about that. We get campy performances, campy jokes, plot beats, etc. and it all worked for me, I’d love to see a horror movie take on this character that works, but I’ll gladly take a good time with this. I’ll be returning to DC Movie Mania soon, but for now I hope you check this movie out.