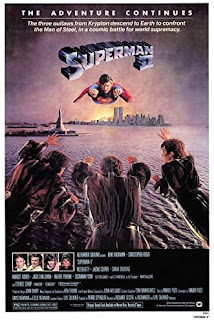 When Superman accidentally frees Kryptonian prisoners, he’ll have to rise to the challenge to defeat his greatest threat yet. Along the way Lois finds out the truth of Superman’s identity while Superman toys with the idea of being normal.

Superman II has seen a fair share of criticism based on it’s production history, which has lead to some debate over which version of the film people should watch. Originally  directed by Richard Donner like the first, it went through reshoots and rewrites with Richard Lester taking over after Warner Bros. had some disagreements with the direction. While a director’s cut (Superman II:The Richard Donner Cut) has been out since the mid-2000’s, I am just talking about the theatrical version for DC Movie Mania. Many consider this to be the inferior version, which is understandable but I do think it has charm and is fine enough, plus with this one feeling complete, there’s argument over the more rough director cut. Anyway, we’re here to talk about the theatrical so let’s get this going.

Where do you go after crafting a successful movie that defines and creates the standard for other adaptations of your medium? You make a sequel of course and Superman II was ready to make that step. While the first was great for it’s more grandiose yet human approach to the beloved comic book hero, the sequel aims to expand the lore a bit, losing some of the more grand elements of the original movie. That’s not necessarily a bad thing, to say this is a bad movie is ignoring just how much of it truly works, but it does feel more by the numbers as a result. Certainly this was less of a problem when it came out, however by now since we’ve seen so many superhero movies it starts to get lost in the pack. It’s a downgrade, not a bad one, but there’s not as much iconic material here and since we’ve seen a man fly, this can’t hope to be a worthy successor.

Where the film succeeds is in it’s cast, there’s still some strong work on screen here, even if not as much. Reeve and Kidder are delightful, even if the romance feels weakened by Lois learning the truth (not a bad idea mind you), it makes the intrigue go down since she quickly figures things out. Gene Hackman is still fun as Lex Luthor, even though his role is smaller and his sidekicks barely appear leaving for less charm. In fact a lot of the returning cast feel less significant this time around, sure we probably get more Superman action, at least more consistently throughout, but the film suffers when the spectacle is not on. None of this is necessarily bad, the performances are still good, it’s just a shame it’s not as good this time out and that it feels like bits are missing certainly doesn’t make this a stand out. I wouldn’t say it’s that it feels like a “been there, done that” feature, the stuff in it are new and progressing the story in ways that should be interesting, it just never feels like the story is allowed to breath and take in the aspects that are supposed to be human. Instead it’s just about getting to the next major idea, which is then treated less epic than it should be, in fact even the Kryptonian villains feel less like an epic new threat, just another obstacle Superman will have to stop.

Look, I love General Zod, along with his sidekicks Ursa and Non, they are definitely the most iconic thing of this movie despite initially appearing last time. Terence Stamp, Sarah Douglas and Jack O’Halloran are great at playing their roles as half Disney villain, half comic book villain, they eat up every scene they’re in. Stamp especially steals the show and is rightly remembered for this performance, I love it, but once they encounter Superman it just isn’t the same. I get that the budget for the effects weren’t there at the time, but I still feel like there were better options for the battles between villains and hero. Instead it’s mostly just here’s a villain doing a trick, here’s Superman countering it, rinse, repeat, some neat commentary and then it ends. The solution is neat, but by then it feels like we never got a worthy battle, I wasn’t demanding some big, destruction heavy fight, but maybe something better than just solving some videogame like puzzles? It’s wasted potential.

Of course the biggest area of issue regarding this movie is that the tone is goofier this time out, especially towards the end. I don’t think it’s as bad as some have made it out to be, but it certainly hurts the movie when it pops up. Sure, the original was lighthearted, but it knew to be epic, it knew how take the concept seriously without losing the fun of the comics, here it occasionally dips into parody. Again, despite the reputation it isn’t there as often as it’s said, but that it’s there really makes it that much easier figuring out which is the better feature.

Superman II is a good movie, I do enjoy it overall, but it’s missing out quality in key areas. It’s easy to see why it’s fondly remembered overall, the villains are mostly fun, the cast is still solid, even with the lack of Brando this time out. Honestly one could even argue superhero sequels have followed a trend started here, with Superman in turmoil over being a hero or not, but whereas the first set a standard and felt big and mythic, this doesn’t. By no means awful, this is worth watch watching, or revisiting if it’s been a while, just don’t expect to be blown away. Join me next time for a more forgotten hero.