Godzilla Vs Kong-Cinema Is Alive And Well 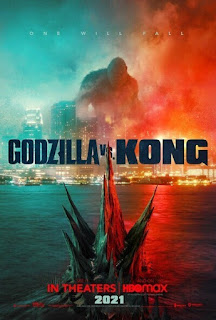 Kong needs a new home, while Godzilla starts attacking a corporation for unknown reasons, eventually the two cross paths resulting in the title fight which is glorious.

Realistically you don’t need my review to know whether or not you’ll like this movie, did you enjoy that clip of Kong decking Godzilla? If yes, you’re the audience for this movie. This isn’t to say there’s nothing of value in this movie beyond the fight, there’s definitely some notable stuff, it’s just it won’t matter. While many movies, especially blockbusters rely on one major factor to hook you, very few know how to do it so well that almost nothing else matters. Yes, the story is very minimal this time out, yes there’s hardly an important environmental metaphor, or message, and even the human cast don’t really do much beyond moving the monsters around to get the story going, but do we really care? Do we really need a full on arc with anyone here, when the movie delivers so much on the fight between the ape and lizard? Looking at audience reactions along with mine, the answer is no.

It’s a popcorn film that’s proud to be that and you know what? It’s cinema in it’s most raw form, you sit down, expecting to see something new and it blows your mind. Sure, it’s junk, but we mustn’t pretend that cinema wasn’t born from junk, people captured what they’d see and the audience ate it up because they’d never seen it on a big screen. While yes, we’ve seen monsters fight, even outside this franchise, the level of detail and polish is enough to make it fresh, it’s not even just the effects, but the use of sets and weight between our titans that make this feel new. Granted after a year in quarantine with so many blockbusters delayed, seeing something like this is welcomed. People love destruction, humor, terror, arguments, everything that some might consider trashy, but garbage is satisfying under the right hands and seeing everything get blown up is enough to satisfy our most primal needs. It’s not a matter of turning off your brain, just the acceptance that you won’t need to use it to get what’s going on, to allow yourself to be distracted so easy.

Of course there’s been much hype over who’s side you choose to be on. From a logical standpoint, Godzilla is the one to choose, from a more emotional and arguably story standpoint, team Kong. I chose Kong largely because I like monkeys and Kong:Skull Island is the best film in the series. Still, the interesting thing is that Kong really is the lead monster this time, despite coming second title wise, which is fair, he was the lead monster last time they tried this, but you’d think they would try to switch that up too. Noticeably though, having the monsters pair up means it becomes obvious that Kong is afforded more personality to shine through, we can always tell he’s just tired of everything and just wants to relax. Godzilla, fun as he is, only gets a moment or two where we can see what he feels, it’s not bad, but it becomes clearer who we’re meant to root for, when he’s just a force of nature of course we’ll latch on to the big ape. This isn’t to say that Godzilla offers nothing, half the main reason you watch this, as well as the main reason we see everything going on is because of Godzilla, Kong’s plot would barely have much stakes without him, he just works as the supporting monster here. So regardless of what happens, you kind of always are on Kong’s side of things, though rooting for Godzilla is fun and understandable.

Look I don’t wanna bother going in circles here, this is a fun movie and it’s easy to see why, I could go deeper, but there’s not much need for a review standpoint. As I said early on, did you enjoy seeing Kong deck Godzilla? This movie is for you then, it certainly was for me, I had a blast and have already rewatched it at home, which is still fun despite lacking the theatrical energy. So Godzilla vs Kong is definitely a must see popcorn film, it’s quick, the action is awesome and you’ll love it. With it being available to stream there’s almost no reason to not watch it, but if it’s possible and safe for you I’d suggest watching it in a theater, the crowd energy might not be there because of safety protocols, but the experience will still be there so definitely see it if possible.