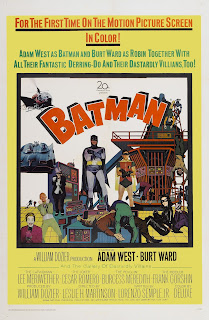 Batman and Robin team up to take down four of their dastardly foes, now together to take over the world, The Penguin, Riddler, Catwoman and the Joker. It will take all their strength and intelligence for such a feat.

Well, DC Movie Mania begins with the first theatrical DC feature, Batman, based on the classic show. For those unaware I’ll be tackling every single theatrical DC feature, plus a bonus DC related film, each divided into their own era. The Early Years, divided in two, the first half with Superman, the second focused on Batman features, the early 21st century features, and finally the DCEU era. This will be in chronological order, minus the last bonus feature, which will be talked about after I go through all of these movies. Of course with this being focused on the theatrical ones, I will not cover director’s cuts, or the straight to video DC movies, I’ll do a few videos covering the stuff, so I hope you enjoy.

I’ll be honest, this is one of those situations where I just do not have much to say on the matter, that’s not to say this is shallow, but there’s not much I can say. Batman (1966) much like the tv show it was based on is a campy film filled with kid friendly fun. It’s got the silliness associated with the character and show, it feels like the silver age stuff, it’s got a Batman who teaches lessons while instilling hope, it’s got a cast of villains eating up the screen whenever they’re the focus. If you can watch 100 minutes of a Saturday morning show, you’ll be at home with this. Essentially it’s a prime example of the show, but on a bigger scale.

While for years many trashed this version of Batman, it’s nice being able to see it free of cynicism and understanding that whether people like it or not, this was and is Batman. Sure, some things are more family friendly, like Batman’s detective skills (oddly though, of the live action features he does more that here) and the characterization, but to end the conversation there is to ignore how this version does have adult goals, desires and views. More so than most Batman features, especially recent ones, this Batman is horny, not in a way that is uncomfortable sure, but there’s a whole group of sequences where his main focus is hooking up with a disguised Catwoman. Then there’s his view on people, retaining hope and trust despite being scum, even giving an obvious Penguin in disguise the benefit of the doubt. Perhaps most interestingly though, is that this is one of the few, if not the only version of this character on film to be a deputized member of the law, meaning he not only works with the police, but has access to their records and keeps in line with their rules and regulation. Sure, being a member of law enforcement is no longer viewed in a positive light, but that is interesting that here he is not a vigilante by any sense of the word.

All of that stuff is fun and gives this a charm that I certainly can’t take from it, but I’d be lying if I said this was a great movie. Yes the cast is fun, Adam West and Burt Ward are some of the best versions of Batman and Robin, the same for Burgess Meredith and Cesar Romero for the Penguin and Joker respectively, while Frank Gorshin and Lee Merriwether are fun as the Riddler and Catwoman, but the story is kind of thin and goes much longer than it needs to. Essentially the four villains team up, they kidnap a sailor with a new weapon, concoct various traps for our heroes and this goes on multiple times before the villains finally unveil their master plan. It’s not awful it’s fun stuff one would expect from a movie, but at a certain point you just wish they’d knock it off and get the story over with. It’s just not complex enough to warrant the time, we could shave off 30 minutes at least without much issue.

Still for what it’s worth, the humor is usually cute enough to get a few chuckles and the campy mood is welcomed. This would best be watched with a young kid, but if you have to see it alone just know you will be able to enjoy a lot of it as long as you love Saturday morning shows. The main appeal are the goofy performances that feel like silver age characters come to life, so it has that going for it, but if you need more action in your Batman I can get why you might skip this.

As their first film on the big screen (well feature length anyway) this is a fun enough DC feature, it properly represents the characters of the time and some lines are just incredibly quotable for their cheese. I wouldn’t say I had a blast, but Batman (1966) is a charming enough adventure that is neat to see just for it’s place in history. While many try to ignore it’s existence, I think it’s worth a check, just as it’s own time capsule of the way people saw Batman during the sixties. It’s cheesy but realistically the idea of a Batman movie quickly released after the first season ended is probably sillier. Join me as we cover Superman next.