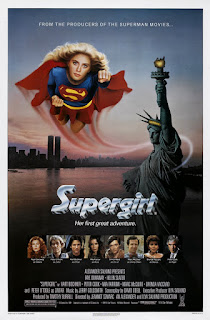 A floating city filled with Kryptonians is put in danger when Kara loses an important item, resulting in her going after it on Earth where she takes on the name Supergirl in honor of her cousin who didn’t wanna bother showing up for her adventure, resulting in a lot of creepy adult men going after high school girls. Geez Clark, maybe you should distance yourself from Jimmy Olsen, dude’s hitting on teens.

Look I saw the extended version of this movie and forgot a good chunk of what happened, that itself is a bad sign, I’ll admit I was sick at the time but still. I’ll get into it a bit more soon, but it really stood out to me this time just how much of the plot involves creepy lust, especially with an adult who falls in love with Supergirl, a teen, sure he’s mostly mind controlled, but it’s not a good look. Anyway, it’s clear at this point whatever heart was in the Superman franchise was gone, this was a cash grab spin-off, but what matters is whether or not it fares well.

Supergirl doesn’t work, the first female led superhero movie just falls flat and at it’s best feels like a cheap knock-off of the original Superman, at it’s worst it feels creepy to say the least. It’s not that Supergirl is bad character, she’s not, she’s been in weird takes, she’s been in good takes, and I know the current show has it’s fans, Supergirl can be fun, here though? She’s just Superman, without the personality and as a girl. I don’t want to blame actress Helen Slater, seeks doing what she can, it’s just the material never asks much from her. Supergirl is portrayed as curious, maybe naive, going scene to scene just doing the hero stuff, with rarely a mention that she’s on Earth to retrieve an item that if gone for too long will kill her people. That’s part of the problem here, the movie sets a goal and stakes, but it becomes less a reason to move the story, more an excuse to have Slater pose heroically to cash in on her cousin’s appeal, while giving a faux inspiring feminist figure. It’s shallow, which is why even though it does do some things right, it ends up being worse then even third Superman.

I won’t act like I don’t appreciate this movie dialing back on the slapstick comedy, or the absurdity that defines director Richard Lester’s work on the franchise, Jeannot Szwarc taking over improves on that at least. If anything this ends up going back to the feel of Superman II, where it’s not as grandiose as the first film, feeling more like a standard hero film, it’s just also not very interesting. I appreciate the villain this time is a magic user, rather than a business man, Faye Dunaway is okay as Selena, but there’s not much there beyond that. Selena starts off wanting more magic, she wants a guy to love her, eventually she wants to rule the world and that progression is never as fun or compelling as Hackman wanting land in the original movie. Peter O’Toole shows up as a mentor for Supergirl at the start, essentially taking the Brando spot, but you can always tell he doesn’t care, even Brando felt like he gave it effort, despite REALLY not caring. Regardless, the classy actors not being compelling could be forgiven if everything else worked, but nothing really does, just because I appreciate some choices, doesn’t mean I like them.

Of course where everything becomes uncomfortable is in just how much the movie focuses on adult men loving teens. I honestly forgot this was in the movie, maybe the extended cut never acknowledged it, but I doubt it, I’m sure I just forgot, but Jimmy Olsen played by Marc McClure (the only returning cast member) is dating Lois Lane’s high school cousin... ew. You may think I’m over doing it, after all he’s still a supporting character, well this also occurs with Supergirl’s love interest. Ethan, played by Hart Bochner, falls victim to a love spell, resulting in him going after Supergirl’s human identity, Linda, a high schooler, while Ethan’s an adult. Okay fine, he’s under a spell, but later it turns out he is in love with her and now that just makes The whole thing creepy, so you got an uninteresting movie that’s now also creepy, neat!

Well, even focusing on his cousin won’t stop the decline, Supergirl is another step backwards for the franchise, sliding further into irrelevance as time goes on. It’s admirable that she’s the first female superhero to get her own movie, I even like that parts improve on the previous entry, but on the whole it’s just bland when it’s not creepy. Even Popeyes product placement won’t make me interested in revisiting this on my own terms anytime soon.