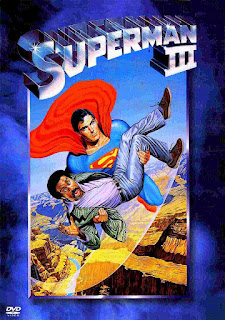 Superman returns to Smallville and hangs around his old crush, Lana Lang. Meanwhile, Richard Pryor plays a computer whiz desperate for cash, so desperate he accidentally joins forces with a greedy villain.

Well, all good things come to an end, while Superman was a comic book brought to life in a grandiose way, Superman II was just the continuing adventure, Superman III became known as a joke. It’s the legacy of it and often considered the true turning point for the franchise, Yes, II had it’s issues but it was still good and epic in moments, this is largely remembered for Richard Pryor stand up that never works. On the other hand, it has received some positive remarks from some, especially once Superman goes evil, with his inner battle being a highlight. Personally I can see where some come from regarding the positivity, but I’d be lying if I said I liked the overall movie.

From the opening minutes one can see where everything went wrong, Richard Pryor is the focus of our intro, which lets us know how much story he’ll be taking up. Now, I will admit, Pryor’s first scene is not awful, it’s not hilarious, but it’s somewhat compelling, I feel for him struggling to find work; but already, the movie is telling us that Superman matters less this time, or at least equally to this random character. After the fine intro for our co-lead, the movie decides to do some title cards, not as epic like the prior films, instead the title cards come in a comedy montage that has become a defining sequence for the problems in the film. It’s bad enough that the material is not all that hilarious, but seeing Superman go from handling serious threats, to seeing him turn off a flaming penguin toy is almost like a parody. Some may compare the tone to West’s Batman, but silly as that was, it felt like an earnest reflection of the comics of it’s time, this just feels like a Three Stooges skit, with Superman awkwardly trying to join. Superman III does not get much better from here.

The film’s biggest red flag is in realizing how much of the cast is missing in this outing. Margot Kidder is quick to leave the film, with the excuse being her vacation, while Gene Hackman is nowhere to be found. Fine, a good Superman story could be told without those two, but considering a major part of the film involves Superman reconnecting with childhood crush Lana Lang, and the villain is another rich con man, it starts to feel like the movie needed them more than it wants to admit. It’s in the villain where the movie suffers a lot more, sure Annette O’Toole is no Margot Kidder, but she’s fine and provides some interest on her own, Robert Vaughn’s Ross Webster is just bland and uninteresting, certainly a weak substitute for Lex. With the only remaining lead being Christopher Reeve, it’s no surprise this one just can’t measure up to the previous two.

Casting problems still continue with the film’s new co-lead/hook this time, comedian Richard Pryor as Gus. It’s not just the obvious desperation for his fans to watch this, but that the film often feels like a different movie when he’s around. I love Pryor’s comedy, but here the material is largely weak and trying to mix his struggles with Superman commentary never works. If there’s any silver lining to Pryor is that he is trying so much it’s hard to hate him even when his material flops, sure it sucks, but being Richard Pryor means he can deliver it with a likable enough energy that I wished I actually enjoyed what he gave out.

Among the few things I did actually enjoy, it’s whenever this movie was about Superman. Reeve as always is great and his delivery of an evil, selfish Superman is honestly kinda chilling and great, it genuinely comes off as Superman going rogue. While the idea of setting this largely in Smallville is more small scale than the previous two films, I didn’t mind seeing some slice of life storyline, especially if it meant figuring out more about who Superman is. Unfortunately that’s really all the movie has going for it, a great performance, a heel turn and an interesting idea about exploring Clark’s home town, sadly the story elements aren’t utilized for their full potential.

I love Superman, it’s sequel was still good, but Superman III is not only where we see Superman take a heel turn, it’s where the franchise took a turn for the worse. Some elements are worth watching, but just like Pryor’s performance, the movie only provides a positive energy, the material itself is lackluster.