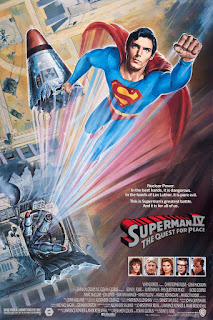 When the world was on the brink of destruction due to nuclear war, one boy bravely asks why can’t Superman stop it? Meanwhile the Daily Planet is under new selfish management, Lex Luthor escapes prison with the help of his nephew, Superman hooks up with yet another woman, and Nuclear Man factors in.

And so we arrive to the final Christopher Reeve movie in DC’s line up, by no means the worst movie ever, but it’s easy to see why most consider it to be among the worst. It’s a film known for being very cheap and having been rushed in it’s production, apparently it was released before ever being properly finished. Let’s get into my thoughts.

Everything wrong with Superman IV is tragic, a bit dramatic? Maybe, but it feels that way. You have the great cast that’s been there from the start, the wacky hijinks that plagued the sequels, especially the third movie is mostly gone, there’s an important message, fitting for a Superman story and it all fails so bad. I’d say this feels like a parody of it’s former self, but it feels more like the movie equivalent of seeing parents tired of pretending to be Santa for their kids. Everyone looks miserable, no one looks pleased to be there, even if the effort is there, the heart clearly isn’t and it’s so bad to sit through.

I love Christopher Reeve and Margot Kidder’s dynamic as Superman and Lois, but in this movie, not only is their love stale, it’s as if Superman’s secret is non-existent, despite Lois still somehow being unaware. Throughout the whole movie, Superman just does the most basic ways of leaving a scene, returning as Clark, only to leave again and it’s frustrating, the first movie made sure the change was convincing, but here that’s no longer the case. At one point Superman has an interview with Lois while having a date with the daughter of the new Daily Planet head (does Superman not love Lois, or is he open to multiple relationships?) as Clark, resulting in that tired sitcom “two places at the same time” plot line, only here it’s the same place but as two people. It’s stupid, reduces the characters into morons and mocks the dynamic of the original classic film.

Don’t hold out much hope for the bad guys while you sit either, Gene Hackman is back, but whereas the first made him a fun dignified villain, he might as well be a villain in a children’s afternoon special. Barely as smart or cruel as he once was, Lex is a joke of threat here, even when his plan this time involves an evil version of Superman born of nuclear energy, Nuclear Man, a super powered villain who’s there to throw some punches, but due to bad effects and fight choreography, can’t even excel there. The only sort of amusing villain this outing, is Lenny Luther, the nephew of Lex played by Jon Cryer as a sort of surfer dweeb, granted I was only amused because I kept thinking that someday Lenny takes his uncle’s name and becomes a better character on a current running CW show.

With everything else wrong, surely they at least get the message right... right? No. While yes the central premise is the nuclear warheads being destroyed by Superman to achieve peace, it’s mostly an excuse to create Nuclear Man. We don’t dive into why this is a problem, Superman is kind of indifferent about people stopping the impending disaster, and by the end Superman gives a faux speech of hope in the idea of peace happening someday. Superman doesn’t really have speeches arguing for the end of nuclear weapons, nor does he actively make a point for peace, other than it may come some day when people want it, it’s vague, lazy and just bad. Like the rest of this movie.

Superman IV:The Quest For Peace is a sad end to this version of the character, it’s bad obviously, but seeing the original cast no longer care, as some awful effects go by gives this a tragic feel. I can’t just ignore it, as it’s still canon when it does have the official voices that once gifted this franchise. It’s short, signaling how much must’ve been removed, but none of what was left out could possibly make this a good movie, maybe it hurts less, but I don’t want it to hurt. It’s the shallow end to a once hopeful and loving franchise that is painful to witness despite barely dragging. One more DC movie and I’ll be taking a short break, stay tuned.