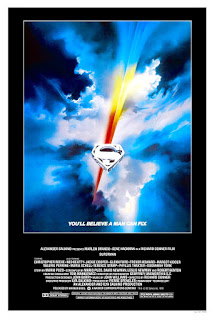 The origin of Superman is explored, while corrupt business man Lex Luthor plans to blow up the San Andreas Fault to control the richest land in America.

If it wasn’t clear by my last review, I don’t plan to make these very in depth, not because these movies are shallow, Superman definitely isn’t, but to get enough of my take out. Well, before I get to the eventual video where I’ll be talking a bit more about these movies, I don’t want to give everything away. In fairness I always feel like I never say enough either because I forget, because I rush as much as I can, or because my thoughts change over time. Some movies you know what you feel about them right away, but most movies change over time, you may like them more, grow to like them less, but you will never have the same exact words or thoughts on them. Superman is definitely one I enjoy the more time passes.

While Batman is what I would consider to be the first DC comics movie, Superman is the one where they really were out to prove what was possible with their material. Unlike the former film, this was not a tie-in to a show, nor was it just aiming for kids and the young at heart, it was a new, redefining take of the hero that would remind adults of why they loved the character, while kids would be introduced to the character in a much larger way than ever before. It had a lot riding on it, it couldn’t just be a fun diversion, it had to make audiences believe Superman could be real and by the end, of Warner Bros proved it was possible, leaving a film that looms large on every film of it’s kind. Sure, in the years that would come, better superhero movies have been made, but this is still the standard to be held against. Superman wasn’t just a movie about a hero in tights, it featured great actors giving great performances, an epic score that no superhero movie has ever matched, a great drama with charm and humor, a special oaeffects spectacle, a heart filled tribute to one of fiction’s most beloved characters, it is the movie of it’s year.

It may seem crazy, but yes, the cast is filled with some incredible performers who give some of their best work here. Christopher Reeve, Margot Kidder, Gene Hackman, all terrific here. Even Marlon Brando, who famously didn’t give a shit behind the scenes, played Superman’s father so well it’s become the iconic take, even adding new lore to the comics with the “S” being a family symbol. While some may treat comic book movies as nothing but a joke to cinema, it is sincerely special to see actors give it their all for them. There’s no cynicism, just sincerity to the material, these are actors, in a movie that will mostly appeal to kids, yet they’re performing as if it’s more important than that. It’s that level of commitment and dedication that makes this all the more special. Don’t get me wrong I love how cheesy and over the top the performances in the 66 Batman are, but I love that with this movie the cast and crew were focused on making Superman come to life with reverence to the material, lighthearted yes, sincere of course, grounded in the emotions and performances absolutely. The characters may act like what we’d expect from them in the comics, but the movie always makes sure to remind us that they’re people. Superman may say cheesy, inspiring  and hopeful lines, but he does so because he is a kind hero, we still see him as Clark trying to get what he wants, even reacting to events based on his emotions. Some may disagree about how grounded this could be if it has Superman, but as far as I’m concerned fantasy need only to treat it’s characters like people to be properly grounded any more and it risks destroying the appeal.

If there’s any major thing that might turn off modern fans, is that Superman doesn’t really have action scenes. Spectacle graces the screen, that much is sure, but a lot of superhero fans expect fight scenes to be a part of that, but this isn’t really about that. Personally I don’t mind, in fact I love that it’s not, it’s proof that despite what some critics may say of the template, superhero movies can do different things. This is the story of an immigrant, a romance, a disaster film, a drama, it’s so much and so good, why should I care that it doesn’t emphasize fight scenes, some people might miss them, and while they’re not wrong, I think they should open themselves to a different kind of superhero movie.

Every time I revisit this film I find myself enjoying it just a bit more, respecting what it does and meant to comic book superhero movies. While I still believe better superhero movies have been made since, Superman still proves to be the standard and it just amazes me that no other live action take has ever come close to matching this in quality. While the lack of fights would later be a complaint for some circles, I sincerely believe a huge part of this movie’s appeal is the incredible cast and representation of the classic comics, those fights weren’t needed. This is one of DC’s best, as well as one of the best Superhero movies delivering the hope that future iterations would sorely miss. Even it’s own sequels could never reach the same highs, as you’ll see soon.