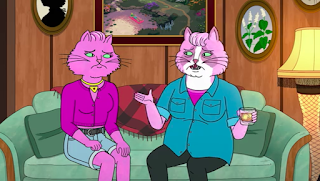 Well this certainly hit hard in the end.
Time for a Princess Carolyn heavy story, it’s about time. It can be easily forgotten, but the more we learn about Princess Carolyn, the more we realize just how tragic she is, she may be the most tragic character of the main cast. She’s always cleaning the mess of others, while suffering from her own lack of success, it’s a shame really. Going into the season we already knew she’d be dealing with adoption this year, but seeing her struggle the way she is just leaves you wondering, is there a happy end for Princess Carolyn? More so than everyone else, she kinda deserves it, the hardest worker, as well as the one who just wants something special out of life, it’s hard to not want her to succeed.

Despite the occasional cut to the set of Philbert, this episode focuses on Princess Carolyn in her hometown, remembering the tragedy of her life there. Daughter to a drunk hick, Princess Carolyn was the only child that didn’t leave her mom, at least for a while. Seeing Princess Carolyn admire Amelia Earhart makes a ton of sense, given hers is a story of inspiration and tragedy. These scenes of the past are mixed with an encounter with a soon to be teen mother looking to give her baby up for adoption, the scenes aren’t as strong as the flashbacks, but they do culminate to a strong moment of Princess Carolyn deciding to offer real advice, something we learn she never truly received as a teen growing up there.

I can’t say this episode’s finale didn’t hit me hard, while I’ve personally never left my parents to a different state, that feeling is too relatable. Seeing family, trying to persuade you away from the next step is harsh but ultimately part of growing up, even if they mean well, sometimes you just have to say no and do what you must, it doesn’t hurt less, you even wonder if the person really wants you to succeed, but regardless of it, you must move on.

I’m not sure if I disliked the rest of the episode, but outside the subplot’s resolution I didn’t remember much. It’s funny to be clear, seeing BoJack complain about stunts is typical, but fun, it’s just not one I though about much once it ended. It’s fine set up for what’s to come, but with so little focus, the episode really should’ve stuck more to the best moments, Princess Carolyn.