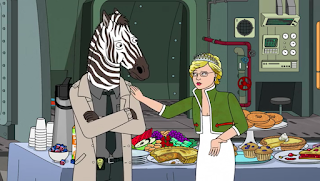 Well this was creative.
Throughout all the pain and sadness, it can be easy to forget that BoJack Horseman is an absurd show at it’s  core which is why this episode changes focus to Bobo the Angsty Zebra, no lie. Setting up the episode to focus on a pair of therapists was a hilarious stroke of genius. We begin with one we saw earlier in the season, Diane’s therapist, she tells her wife, who also happens to be a therapist (or maybe not, to be honest despite her different set up, it seems to be a similar position) a story about her work, though to avoid breaking her rule of confidentiality she turns our characters into different people. BoJack is Bobo the angsty Zebra, Diane is princess Diana and so forth, it’s a silly gimmick that is a riot.

The wife then talks about her day, working as a counselor for What Time Is it Now? The company behind “Philbert”. Again, similarly she changes our leads, Todd is a king with a hand for a head, while Princess Carolyn... I’ll let you see what she becomes. The two stories barely intertwine, but the jokes keep coming and the set up never wears it’s welcome. On the Todd and Carolyn side, things remain fairly wacky, while the main story grows darker as it goes along, it’s still a silly episode overall, but seeing BoJack, I mean Bobo reveal more and more, it becomes clear where this will head (Bobo claims he’s starting to feel like his TV persona). It’s absurdly hilarious all throughout, eventually even showing that one story can solve the problem of the other, but sometimes people’s issues aren’t easy to fix.

We eventually learn that Diane is upset with BoJack, as BoJack keeps avoiding his problems, never talking about them. BoJack thinks he’s fine, but Diane insists he’s not, culminating to her writing a scene for the show, where BoJack is reminded of his past. Diane stands proud of hitting him hard, but our episode closes with a defeated BoJack confused. It’s an emotional gut punch we’ve needed to see and that it comes from an otherwise incredibly absurd episode is very shocking.

While this episode doesn’t stand out as much as the previous, it’s still one of the show’s highlights, an incredibly absurd and bizarre one. I loved it, even if the tone in the end was out of nowhere, because it was earned, after all the episode dealt with therapists, it makes sense would eventually be haunted by his biggest mistake to date. I wonder if we’ll ever see Bobo again though.