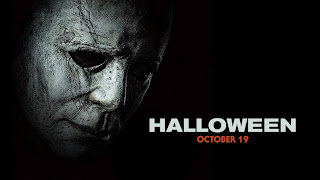 No "trick or treat motha-fu--as" this time? Fail.

So, how does the latest Halloween fare? Pretty well actually, it turns out that erasing everything after the original was the right call. You read that right, Halloween 2018 is a franchise film that decides to erase all continuity from the sequels, so for the first time since the original film Laurie Strode, is in no way related to Michael Myers. The film makes sure we know that's the case early on, but thankfully the reveal is natural.

Taking place forty years after the original, the film is centered on the effect Michael Myers had on Laurie(once again played by Jamie Lee Curtis), which is where the film is at it's most interesting. One thing films like these often ignore is the trauma that comes from nearly being killed. We get to see Laurie having become a bit of a nutcase because of her original encounter, since that night she's done nothing but prepare for another encounter. On the upside it means she's gotten ready for an eventual badass fight with Michael, the downside is that she's hurt those close to her. We get to see Laurie's daughter Karen, played by Judy Greer, who was raised to fight Michael as well, the training eventually results in not only child services removing her from Laurie, but Karen growing to resent her mother. Also on-hand is Laurie's granddaughter Allyson, played by Andi Matichak, who's intent on having Laurie a part of her life, despite Karen's resentment. Without giving much away, the three women eventually get to have a moment that I'm sure women in the audience are going to love, say what you want about the film, there's no denying the women get to kick ass.

Where the film might be more mixed is in the Myers side of the story. Personally I had a ton of fun seeing Michael go on another killing spree set to a fantastic soundtrack (done by original director John Carpenter himself), but if you were looking for something incredibly different you might be disappointed. I don't think anyone expected this film to reinvent the genre like the original film did, but without much change to the formula, I'm sure some won't be too impressed. Personally I'm satisfied with what we got, but I know this area will not work as well for some who are just tired of this franchise.

SPOILERS!!! (Skip to next paragraph to avoid)
At one point in the film, specifically before the third act, there's an attempt to change the formula, but the movie never goes all the way with it. Right when the film starts it's clear that the doctor in this film is a little too interested in Michael Myers, almost as if he's a fan of his work. Once Allyson gets picked up by a cop interested in helping Laurie kill Michael, the movie takes a surprising turn, the two, along with the doctor, see Michael on the road. After finding Michael, they run him over, with the cop attempting to put a bullet in Michael's skull, as anti-climactic as it sounds the movie pulls a shocking move, the doctor kills the cop, deciding he wants to keep Michael alive to force an encounter with Laurie. There's almost a fun idea there, the film feels like it's setting up an odd team up between the Strodes and Michael, but the movie then has Michael kill the doctor, making it a bit of an odd plot digression. Ultimately the film still entertains, but if the movie could've been better, is if they continued working with the idea of a crazed doctor trying to pull the strings for his mad studies.
END SPOILERS!!!

Does it change the world? Absolutely not, and some fans might walk away disappointed, but if you want some fun kills set to good music you're in for a solid good time. On the other side of things, I can imagine a lot of fans, especially women, loving the badass women on the film. Seeing Laurie now ready to fight Michael, complete with a scene where she pulls a "Michael" on Michael is worthy of a fist pump. Halloween is definitely the best sequel in the franchise, a fun tribute, a pretty solid continuation and an empowering film for women.