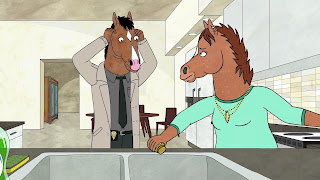 Drugs are BoJack’s friends.
So far BoJack’s had it pretty good this season, sure he’s had some issues, but in terms of big mistakes? Lacking so far. That’s what makes this episode such a gut-punch. As we’ve seen hinted prior to this episode, BoJack now dons his show’s costume 24/7, moving him towards an obvious eventual meltdown, but before that Hollyhock arrives.

Hollyhock’s arrival is pleasant, a reminder that BoJack can be good, after all he’s pretty good to his sister. On Hollyhock’s part, she still feels trauma from when BoJack’s mother was drugging her, a trauma that leads to her dumping BoJack’s painkillers. BoJack, still troubled by his back, takes his sister across town for some painkillers, a move that gets progressively worse the more it becomes apparent that BoJack might not need his pills as bad as he is saying. We get some fun cameos as the drug search goes on, including Dr.Hu and Officer Meow Meow, but it all comes crashing down as we realize how nasty BoJack is being to his own sister.

Meanwhile, we see Todd trying to please his friend Emily, who has just broken up with her latest boyfriend. There’s not a whole lot besides great humor there, but I will say that Todd, an A-sexual, creating a sex robot is one of the show’s funniest moments.

The second subplot has a bit more substance to it, with Princess Carolyn once again meeting with former lover Ralph. They’re such a cute pair, it’s hard to believe that theirs is a failed relationship. We see the two banter, discuss their feelings about the break-up and eventually rush to the hospital for an adoption. It ends badly for the two, but one must hope it eventually goes well.

It is pretty clear that this episode is about the disappointments in old relationships once it’s all laid out. BoJack tries being a good brother, but fails when he endangers her just for some pills, Todd wants to be an amazing lover for Emily but can’t due to his sexuality, while Princess Carolyn no longer desires Ralph, despite pursuing an option he suggested. BoJack of course gets the most here, not only is he now Philbert (at least in appearance) all the time, but he’s drinking a bottle vodka a day, rather than the bottle a week he started the season with. The subplots admittedly could’ve worked more in other episodes, but connecting them with a theme was a nice choice, though personally, I feel like BoJack’s story was more than enough here.