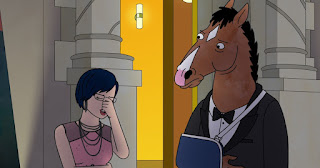 BoJack thinks his behavior is okay.

And now we begin BoJack’s descent of the season, he excuses his horrible actions because he’s sad. It’s been pretty clear fairly early on that this season was tackling the subject of #Metoo,  here it becomes abundantly clear that BoJack would be the accused in our world. We’ve known BoJack to be horrible before, but here we’re flat out told that he’s not as sympathetic as we assumed. BoJack is sad, he’s had a terrible life, but he’s also brought pain to those around him. Diane, ever the worried friend, starts realizing the trouble that he brings, the trouble she’s allowed in making Philbert a sympathetic character, horrible actions justified because the character is sad. It’s a very obvious meta-commentary, one that can’t help but make you wonder if the creators feel any regret with the show they’ve made.

Aside from the heaviness of this revelation we do get some light-hearted story threads. Todd’s sex robot, Henry Fondle, somehow becomes the CEO of What Time Is It Now? Which is in no way bound to lead to some horrible consequences. Elsewhere, Princess Carolyn tries calming two popsicle comedians (really) who claim “Philbert” stoke a joke from their popsicle; it’s a funny gag that gets funnier once you look back at the season for proof. Rounding out the lighter stories is Gina and BoJack’s relationship. They seem to be cute, with Gina concerned about BoJack’s health, all while her fame is about to rise, possibly beyond BoJack’s.

The heaviest sub-plot, is Mr.Peanutbutter’s growing uncomfortable feelings about Pickles. The knowledge of his age versus the age of his lovers is finally creeping in, Pickles may act like him, even think like him, which is the exact problem. Pickles ignores the show, instead focused more on her social media problems, Mr.Peanutbutter asks for an honest opinion, but is displeased that she won’t admit her true opinions on the show. Pickles is obviously the dreamgirl he never realized he didn’t want.

Back to BoJack though, we really start questioning whether we should still like him or not. It’s not just the addiction he’s growing, or the way he treats Diane here, it’s everything, he consistently does the worst, but we let it slide because he ends up feeling bad. Diane even calls this out, BoJack can claim he’s a victim because he has to live out the knowledge of always doing wrong, but what about Sarah Lynn? She’s dead because he did wrong, she doesn’t get to live for the mistake she was pushed into. No one is saying BoJack is without redemption, we know he can be good and tries to do so, what is being said is just being sad is no longer good enough.