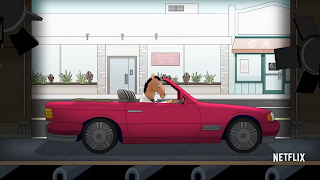 Reality just crashes down.
As always, it’s the 11th episode of the season where everything just crashes down, BoJack and Philbert become one and the same. It’s been hinted from the beginning, with everything being ramped up once BoJack kept dressing as Philbert, but here we are, the moment where BoJack starts believing he’s his character. It’s funny at first, seeing BoJack think of himself as a hard-boiled detective, but as it continues, the act becomes terrifying as we realize there’s something deeply wrong. Maybe it’s the drugs, or the performance of a similar character, or it’s as Todd mentioned a couple of seasons back, it’s just BoJack, just him.

The episode begins with a neat “Philbert” intro, further reminding us of BoJack’s descent. All seems well, until BoJack starts thinking again about Flip possibly messing with him. The lack of sleep and surplus of pills lead to the mystery of the episode, who sent BoJack a mysterious letter. In character, BoJack interrogates everyone he knows, pushing them as his madness continues.

The person to face the biggest push here is Gina. Confused about what her lover is raving about, everything builds to her realizing BoJack is an addict. Things only get worse after this, poor Gina clearly cares for BoJack, but like any person she’s concerned about her career, being tied to an addict will only diminish her rising star. Maybe it’s selfish, but consider how hard it is for a woman, especially a woman of color to rise in her career, suddenly her worry is understood. We’ll get more into that in the next episode, but this is certainly a huge downside to being tied to BoJack.

Where the episode hits it’s strongest is once BoJack hallucinates a musical number, not because the song is solid, but because it hits one of the show’s best surreal moments. BoJack is constantly moving between fiction and reality, driving is real, or not once the world morphs to a set. We see BoJack become an aggressive monster, despite finding out the letter was fake, eventually committing his worst act since season two. It all ends with a calm visual that manages to stun after all the awful things we’ve gone through seeing.

This is probably on the weaker end of penultimate episodes for the show, but it’s still shocking, proof the show is smarter than most of what’s on now. Let’s wrap this season up on a strong note yes? I think so.