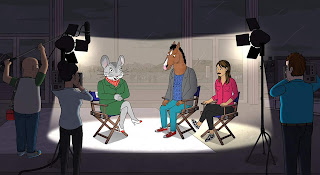 BoJack did a bad thing.

Here we are again, the season finale, where we get a glimpse of what’s to come, or possibly the ending we might not realize was deserved. I know if it is the end plenty of fans will be disappointed, part of me would be, but it seems fitting. I’ll keep this thought in mind as we reach the end of this, just be aware I am not afraid to spoil things here, okay? Okay.

Starting with the main plot, BoJack is completely unaware of what he did to Gina, he seems to be calmly ending his high for now. After Princess Carolyn relays the news to him, BoJack seems fine, a bit lost to what’s going on, but fine. After a request to see the video reveals to him how bad he was, BoJack, begins to feel guilt over what he’s forgotten, even offering to admit fault in an interview, which Gina decides not to accept for reasons that I’ll get into later. This culminates to BoJack seeking help from Diane, who lays some hard truth to him, there are no good or bad guys, just guys who sometimes do one or the other. Revealing the disturbing truth won’t change things because the world will hold him no more accountable than he himself will. This ends with BoJack deciding to go to rehab, where he may get better, or may not.

Meanwhile, Princess Carolyn is now being given the chance to get a baby, but “Philbert” being in a crisis is holding her back. Aside from the episode’s funniest moment (wherein both of her assistants are too dense to realize their truth) Princess Carolyn’s story is perhaps the clearest sign that this may be the end. Since the first episode we’ve been aware that Princess Carolyn has wanted a child, seeing her ditch the chance to rescue her show in favor of getting a baby is what shows her real growth, between her life or her career, she has chosen her life. What will happen now that she’s a mother? Part of me is curious, but another part feels like it’s fine if we leave her story there.

On Diane’s and Mr.Peanutbutter’s end, their love is confirmed dead, there’s no going back to the status quo, at least if this is the end. They fool around again, but Diane makes it clear, it’s over she doesn’t want to go through their love again. Diane is actually being the voice of reason throughout this episode, when her job offers her the chance to be the face of their new video series, she declines (though if we get another season she may change her mind), when BoJack asks for her help, she accepts but only in a way that may actually help. Mr.Peanutbutter on the other hand, he fails to mature, choosing to propose to Pickles, dooming him to his cycle once more, which is a disappointment but a fitting end to his arc assuming it is. Mr.Peanutbutter rarely listened to Diane’s warnings, it makes sense that his end would be no different.

In our stillest, yet serious turn of events, putting Henry Fondle, a literal sex robot, as the head of a business, leads to an unsurprising amount of accusations. This shuts down the TV division of What Time Is It Now? Resulting in massive layoffs, especially for the women who worked on the site. It’s the ironic downside of it all that really stings, the upside is that women are heard and a monster gets put away, the downside is the business still loses so many workers, most of which are women. I doubt the show’s stance is that women should keep quiet about such things, putting aside that Fondle is just spouting nonsensical phrases, the result here illustrates an uncomfortable truth, even when women are brave to report about their experience in being harassed, as they should, the reality is that they might lose everything for having come forward. This isn’t a warning, but a reminder that even when you stand up to harassment, the consequences can still affect you, because that’s our sad cruel world. Which even Gina warned BoJack about, sure she could let him be honest, but doing so will just harm her career, making her just another piece of BoJack’s history of bad moments. Maybe it’s her being selfish, or cowardly, but it’s understandable that with her dreams of hitting it big that she’d want to avoid  becoming known as only the actress who was choked by BoJack. Fondle getting offered a new job right away just further cements how Gina’s view is true. The ending here is Todd walking away from it all, because Todd will always be off to the next distraction, it’s who he is.

As of this writing, I’m not sure if we will see this show come back, part of me hopes it does, but another part understands this might be the best way to end the show. Mr.Peanutbutter is doomed to his cycle, Diane finally stands for her morals more often, Princess Carolyn chooses the family life over career, Todd is still off doing his thing, while BoJack finally accepts outside help. I’m not saying this show can’t continue, but as far seasons go, this might be the best we can hope for that stays true to the show’s message that good or bad endings are meaningless. This was a wonderful way to close out BoJack Horseman season 5, and if it closes the show out, it’ll be a fantastic finale.