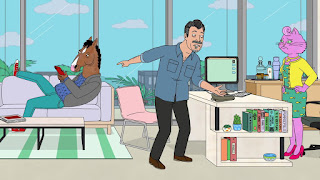 And here’s another episode for the #MeToo crowd.

Upfront, real life sucks for a lot of victims, especially women. For years we are told to report all wrongdoings, yet time and time again, we learn that rape and sexual assault happen with little to no repercussions. Once again this show has chosen to tackle the subject of celebrities doing horrible things, largely referencing sexual assault. It’s not quite as great as the Hank episode, but it’s definitely a stand out.

One thing I always assumed BoJack Horseman would tackle in it’s fifth season was the MeToo movement, after all it’s really exploded since the last season, so I figured that it’d make its way in. I assumed that it would lead to a follow-up to the Hank episode, where we finally saw him in trial, thankfully I got it wrong. Newly introduced celeb, Vance Waggoner is our focus, an amalgamation of the worst outbursts we’ve seen from the likes of Mel Gibson and Alec Baldwin. He’s hilarious and brought to life by Bobby Cannavale, but he ultimately works because much like Hank, he keeps getting away with his horrible deeds. The reality of it all, is that even though some celebrities are eventually punished, most will eventually be forgiven regardless. Even Bill Cosby, who just finally got a sentence, will do a few years, assuming he lives, while groups of people are already defending his legacy, as if 60 women are less honest than one horrible man. I’m glad this episode wasn’t a Hank continuation because that would’ve been dishonest, there’s too many monsters in our world to tie all problems to one person, hence the episode’s amazing joke about an awards ceremony for people who’ve done terrible things, but have “apologized”.

Anyway, what about the episode? Well, again it’s great, reminding us that though there are consequences to horrible actions, for the famous and powerful, it’s a minor detour of a few years at worst. Which is fleshing out the theme we saw took place in the season’s first episode. BoJack even tries to be a good person here, when he’s accidentally held as a feminist hero as a result of a misunderstanding of his reaction to cheese. While it may add to BoJack’s nature of being self-centered, it eventually leads to our understanding that deep down he is well-meaning, because by the episode’s end he does reach out to Diane, the only main cast-member to actively despise Vance. Vance proves he is awful, BoJack, but without an actual positive center, he says horrible things, does horrible things, publicly apologizes, but never actually means it. BoJack eventually realizes his own show (which Vance rightfully called sexist, despite it being a way to boost himself) is normalizing sexist ideals, but he doesn’t double-down on defense, he realizes that Diane, could change it, give her the power to do something positive. The attempt is ruined once Diane actually steps foot on set, but seeing BoJack try gives the viewer hope he will change, without it feeling too corny of course.

All things culminate to a great finale for the episode as Ana Spanakopita returns (a highlight, thanks Angela Basset) to offer one last gut punch, a reminder that BoJack once came close to having his way with a minor. Diane is understandably shocked, but we don’t know just yet what she plans to do with this info, the audience on the other hand knows this season will go up close to our lead, is he worse than we’re giving him credit for? He tries to do good, but trying isn’t the same as doing, which he has done a lot of horrible deeds. I don’t believe BoJack is without redemption, but then am I falling for what this episode is trying to teach? Am I forgiving someone because of the normalization of their behavior?

My point is this is an amazing episode, and it’s given me a lot to think about.