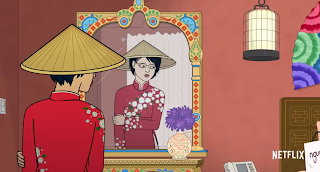 Well this was relatable.
Following up a solid start for the season, comes an impressive Diane episode about our connections to who we are. As we all know, Diane has roots in Vietnam, thus an episode about her getting in touch with them was long overdue. This is without a doubt one of the show’s strongest episodes, it doesn’t sugarcoat the reality of what it means to be an outsider in a world you’d expect to fit in. Maybe it’s a meta-commentary on how voice actress Allison Brie isn’t actually Vietnamese, maybe it’s just a story, but for me, an American born child of Mexican immigrants, this story just hit me hard, because I’ve been there, sort of.

Anyway, let’s get to the story of the episode, Diane dealing with her newly divorced life. Seeing Diane struggle without the safety net of Mr.Peanutbutter’s finances is funny enough, but I’m impressed that the episode avoids making her realize/think it was a mistake getting divorced, most shows would probably do that. Of course, once we realize why she left to Vietnam, it might seem like it’s falling into that trap, but I don’t think it does, because Diane isn’t really expressing an interest to return to her ex, she’s reacting to how quick things change. Back in Vietnam though, the bulk of the story is presented as a list for Diane’s job, highlighting the positives of going back home, intercut with clips showing how she’s just as much an outsider, if not more so in what she assume would be home because of her roots. Diane knows nothing of her language, her family never taught her about where she came from and other tourists treat her as a local regardless. Everything culminates to her feeling alone in a world that hardly seems to want to let her belong.

This episode was very relatable, as I’ve mentioned before, even if I’m not a Vietnamese woman, or a recently divorced woman for that matter. It’s the feeling of being alone in a country you’d think you belong to culturally that gets me. I used to visit Mexico once a year, every year during my childhood, it was a decent experience, what I remember the most was always being treated like an outsider, by people who were like me, so to speak. Granted, I knew the language, enough, as well as I had relatives there, but that doesn’t change how much you can feel like an outsider when the people you’re told you relate to, think of you as something different.

Of course we still get laughs here and there, so if you feel like you can’t relate to a minority feeling like an outsider, don’t worry, you’re covered. One particular joke that killed me involved unions, but there’s plenty of others you’ll find amusing, especially a running gag about a movie.

This is one of the few episodes of the show that is not BoJack heavy, which is fine, it manages to be a touching, relatable and realistic feeling story about visiting a nation to connect with your roots. I was not expecting this from the show, but I’m beyond glad that the show tackled this idea, easily among the show’s strongest episodes.