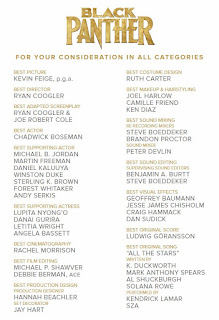 One day a superhero movie will win Best Picture at the Oscars, it should happen in 2019.

We all expected it, some demanded it, others dreaded it, but the push for Black Panther at the Oscars begins now. A few years back this sounded impossible, now I not only believe it, but I believe Ryan Coogler’s superhero flick deserves to win. Let’s back things up, as you all know, Black Panther is the product of Marvel Studios, famous for crafting the best modern superhero movies, as well as a subsidiary to Disney, currently infamous of firing one of the Marvel directors (#RehireJamesGunn). By no means should that garner Oscar talk, at least given what tends to get nominated, but Black Panther is not your average Marvel film, it’s also a film that represents a large group of people that aren’t white, while also having some strong morals and messages, AND, it also feels like the kind of film we’ll all look back to years from now.

This isn’t all to say that Black Panther is the first Marvel film worthy of some serious Oscar noms, I am saying it’s the first with a serious shot at it. Personally, even if it’s not my favorite, I think the change that was apparent in the industry made The Avengers worthy of best picture. I don’t know if Iron Man was worthy, but I remember reading the Oscars did consider it, when it came time to explain what would’ve made the list had they nominated ten features that year. I think both Guardians of the Galaxy films (#RehireJamesGunn) were also worthy of the big awards, which admittedly might just be me, especially for part two, but I stand by my thoughts. That all being said, I never believed any of those had a fair shot, given what we know about the Academy’s tastes, with Black Panther, not only do I think it has a fair shot, I’m asking for it to win.

Just to be clear, this isn’t my favorite film of the year so far, nor is it even my favorite Marvel film this year (Team Thanos, sorry) but I feel it’s important that this is the one to win. Sure it’d be nice to see this get at least the technical awards (it deserves costume, that’s true) but I don’t want the Oscars to just give it that and call it a day. Give Ryan Coogler his due, he’s directed some fantastic films and you know he’s earned it. I’m not sure about all the actors and actresses being pushed, but I do think Michael B. Jordan is worthy of it here, not only was he a favorite for many, his Kilmonger performance was good enough to make you forget how over the top his name is. Give it writing, give it cinematography and most importantly give it Best Picture.

With the Oscars claiming it wants to be more inclusive, right down to adding a ton of new faces, it’s time to really test that. Sure, we’ve seen the effects, Moonlight and The Shape of Water both won since the new rules were implemented,but let’s see if the Oscars can give it to a worthy superhero film. I know some will say Black Panther isn’t worthy, that it’s just another trend, but it truly isn’t. Look at how many black children, teens, adults, people, have been affected by this wonderful movie. You can’t pretend it’s not a cultural event film, it’s stayed in people’s minds for a reason, because not only is it good, but it had something to say about our world, while also acknowledging how a futuristic African society might react to real world injustices throughout history.

I’m sure we’ll one day see a superhero film be Best Picture (no, Birdman doesn’t count). Maybe when Marvel Studios releases it’s epic finale, after all, Return of the King won after it’s previous installments lost, so that might be when we see a Best Picture win for them. That’s not good enough for me though, if the Oscars wants to prove their relevance now, they should give the award to a solid, relevant film that has impacted so many, Black Panther deserves Best Picture.