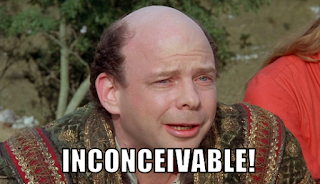 I like my movies with unapologetic stories, thank you.

What is an unapologetic story? I’m sure many of you will ask, to me, it’s a story that never forces an explanation out. Too often we get movies that decide certain things MUST be explained to the audience, be it something to avoid “plot-holes” or because we apparently won’t understand the story without extra information. I don’t like that, while a good story can be fleshed out plenty, a great story knows where to trim the fat and let the audience understand, without bogging the story down with unnecessary information. For example, a few years ago the movie, Ted, hit theaters, a comedy about a foul mouthed teddy bear that comes to life due to Mark Wahlberg wishing on a star. Now whether or not you love the movie, I know we can agree that explanation is enough, we all know about wishing stars, we really don’t need more to justify the movie.

Are all movies that avoid over explaining their stories great? No, but the best movies never feel like they’re explaining too much, or worse, ashamed of their genre’s more fantastic aspects.Conversly, not all movies that over explain themselves are bad, but plenty are unable to attain greatness because of that. Time and time again, I find myself loving Movies that are unapologetic about their worlds, while those that aren’t often make me wish they were.

One of the most beloved fantasy films ever made is The Princess Bride, a fairytale that is a prime example of why movies should never be ashamed of their genres. The movie opens with our world, a boy is sick in bed and his grandfather comes to read him a story. Personally I find these types of openings to be among the least interesting, get us to the story, forget the modern world, BUT, this movie makes it work because just as the boy thinks he’s getting some boring story, we believe that too. As the movie goes along, not only does he get hooked in, so do we, almost as fast as he does,  yet the funny thing is, the story is never made “hip” the grandfather presents the story to the boy, the proxy of the audience, as is. The movie does poke fun at tropes of the genre, but it never feels above them, nor does it try to explain the more ludicrous aspects, we are expected to take everything at face value, no explanation needed, not that the grandfather would even give it, as the boy questions a few things along the way, but the story is presented as is regardless. This is important, because a lesser film would’ve had the grandfather changing the story to keep the boy’s interest, while the movie itself would’ve probably chosen to flat out mock the tropes, rather than gently poke at it, a less charming film for the cynics who need real world logic, rather than just accepting fairytale logic.

If you want examples of movies that do the opposite of that, you need to look no further than the recent string of “Disney Remakes”. By no means is what I’m about to talk about limited to these remakes, but they are incredibly common here; Cinderella can’t just live with her step-family, she has to stay because of her mother’s memory. Gaston isn’t just a jerk, he’s now obsessed with a war that probably left him mad. These pieces of information don’t add anything to the story, they just slow it down so that the picky among us can have reality seep into our fiction. At what point did any of us sincerely want the Disney version of Cinderella to explain why staying in the house was important? I know it was commonly nit-picked, while some understandably thought it was sexist, but the thing is we have a fairy tale being played out, it doesn’t excuse the sexism I’ll grant you that, but the point isn’t whether or not Cinderella is a feminist hero, it’s that kindness can get you good things. Stories often provide lessons, even while entertaining us, to focus entirely on the logic defeats the purpose, especially in tales that are meant to be fantastical. For me, Cinderella never left her abusive step mother because she had no financial way to do so, because she never thought she could get more (remember, she lost her father at a young age) because the time and setting suggest she’d be unable to anyway given her status as a young woman, but mainly because it’s meant to teach young viewers to be kind. You may not like the story and that’s fine, but to demand the fairytale add real world logic, like maybe she stays because she wants to keep her mother’s memory alive, is unnecessary and silly information, it doesn’t add to her character, it just exists so Cindy comes off less moronic and submissive, which isn’t the point.

The problem with adding unnecessary information to your story, is that in doing so the story begins to lose confidence, the info is added so we can understand the logic, but it also feels like an apology that sums up to “wait! Sorry, I didn’t mean to assume you’d get the idea, here, let me explain why magic”. If the story is good, adding more explanation won’t add greatness, it’ll just detract from the entertainment.

This isn’t just a fairytale thing mind you, it can affect any genre, even the ones more grounded in reality. Take Citizen Kane for example, the movie begins with Charles Foster Kane uttering the word “Rosebud” on his deathbed, who heard him say it? Well it really doesn’t matter because we did and what matters is finding out what that meant. The point of the story is that Kane lost his innocence, therefore became a lonely, tragic figure, that’s what we want to understand, not how anyone knows his final words despite dying alone. The internet has called this a major plot hole of the film and understandably so, it is funny to point out, but does anyone really want to “fix” this? If I remade the movie just to include a security camera, or perhaps an intercom button he accidentally presses, just so he’s both alone and can say the word to his staff, would it even be better? No, cause you’re not supposed to care about who heard it, that’s just useless information dragging out the film’s run time.

A more modern example would be Guardians of the Galaxy, a film that thrives on being a Sci-Fi film above all else. Personally, I love this movie and it’s sequel, they may very well be my favorite Sci-Fi films, there’s just something incredibly personal that I can relate to. Among the main reasons I love the two films is how they don’t hold back from being weird or offbeat, we accept that the Raccoon talks, we accept that a cassette player works in space like it’s no big deal, we even accept this all exists in a universe like ours. Of course the picky among us will question why everyone talks in English, which is thankfully never explained, at least not explicitly. The first film does mention Starlord has a translator implant, but it’s revealed via text when you see him in a prison line-up, meaning only those looking for Easter eggs will notice it. The director (#RehireJamesGunn) even mentions these translators are common for the characters in his film, which is nice, but thankfully never eats up the film’s runtime to let the audience know. It’s a movie, we don’t need to know why they speak our language, they speak our language because we want to understand the dialogue, sure there is a reason, but I’m glad the movie is smart enough to just let it be an Easter egg at most.

So when are explanations okay? Everyone will have a different answer, but for me, it’s when they’re there for a specific story related reason, not for logic or to clear some sort of “plot hole”. So if the story says “to break this spell, you need true love’s kiss” or “you can’t hold the space rock because it’s too powerful for mortals” those are fine, I need that information. The story will be fine if you don’t explain why the gremlins don’t multiply in the snow, despite it technically being water, if that bothers you enough to ruin your fun, I don’t know what to say.

Now, this isn’t to say I want all movies to play like your average story from whatever genre they’re in, I know that’s a common reaction I get when I bring this up. An unapologetic story can still present new ideas without explaining aspects of it’s genre, which may shock some. The Disney movie, Frozen, is unapologetic about being a fairytale, it just subverts the love trope. Whereas the average fairytale presents love between couples as the solution, in Frozen, the solution is sibling love, presenting a positive message for a new generation, without losing the feel of the genre.

Contrast that, with The Princess and The Frog, a Disney movie I really like, but falls into the trap of explaining itself a bit too much. Now admittedly, the film does walk a bit of a tightrope as the movie takes place outside the fairytale, in fact the fairytale it’s based on is a story in the world, so some grounding was expected, but it still tries going in both directions, resulting in a well made film, but one that understandably never rises to near perfection. First, Tiana can’t break the curse because she’s not a princess, okay fair enough and her frog transformation is a neat choice to the story, but then Tiana’s friend can break the curse because she’s the Mardi Gras princess, fair enough, but they miss their chance so just accept their fate and get married I suppose, which breaks the curse because Tiana’s now princess by virtue of marriage? This is just breaking it down, there’s a few more bits that are there to explain the story, which again, is a well made one, but a few details could’ve been left out and the film would flow better. The story is attempting to subvert our understanding of fairytales, which is admirable and it doesn’t drag the story as much as my earlier examples of over-explanation, but it still ends up stumbling a few times through it’s story, which is why I’m not surprised the film didn’t exactly reignite audiences interest in 2D animation.

I actually feel similar about The Dark Knight and other Nolan films as I do about The Princess and The Frog, well to an extent anyway, because I still prefer the frog movie over any Nolan film, but I think you get my point. I’m not gonna drag this out anymore, I really don’t need fanboys insulting me here. Movies like Beauty and the Beast (2017) Man of Steel and even something I like, like Rogue One, would benefit with confidence in their genres, less useless explanation. Movies I love, like The Princess Bride, Superman and Star Wars, benefit from embracing their genres and being unapologetic stories.