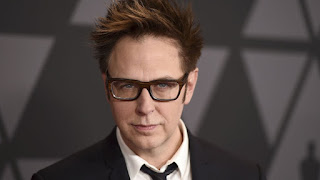 #RehireJamesGunn
Look, I never thought I’d be doing something like this, sure I do think pieces, reviews, suggestions, etc. but a written article on telling a big corporation they were wrong for firing someone? Not exactly one I want to do. I know a lot of people have been wrongfully fired from movies, but the thing is, in most cases, at least in recent memory, I haven’t felt this angered by it. Was it wrong for Marvel to fire Edgar Wright? Or Lucasfilm to fire the various directors they’ve fired? Possibly, but those were for creative differences, so even if I disagreed, I understood. James Gunn was fired for making jokes a decade ago, jokes he apologized for, jokes he stop making, what the hell? Sure they were jokes in bad taste, but so what? A lot of people did those back then, some even continue with no repercussions, just ask the South Park guys.

Now I’m not saying there shouldn’t be repercussions for bad jokes, but a bunch of decade old jokes? That’s insane. It’s not even like said jokes prove anything, sure pedophilia is wrong, but making jokes doesn’t make you one, so can the supporters of his firing please shut up about that. Commonly, a lot of people cheering on this decision have been comparing it to the Roseanne situation, which makes little sense, Barr made her joke recently, had been doing so for years and her racial humor does make her racist. If you don’t understand how jokes from a decade ago are less of a problem than consistent jokes, you’re part of the problem, especially if you don’t think racist jokes make you racist, while thinking Gunn’s (admittedly horrible jokes I’m glad he apologized for) makes him a sex predator.

I know I’m probably not saying much new here, so many have been vocal against this decision, but I felt I should be clear about my thoughts, even if I can’t perfectly put everything into new words. This stuff doesn’t just affect Gunn mind you, it matters because now anyone anti-Trump (the real reason he got mobbed, don’t forget it) can be fired using this tactics, thankfully no one else has been yet, but it’s possible. In fact, for people of color, people like me, we can get fired for even trying to break into the business, again it hasn’t happened, but the precedent is there. That’s why it’s important to stand for Gunn, if it happens to a decent guy like him, it’ll happen to more (they’ve tried) and you can bet the ones they’ll try it on the most are the vocal people and the people of color, who already struggle to even get in the industry.

Well this was shorter than I expected, but for good reason, it’s actually the introduction, yup I’m planning to do a few more of these for a while. Why? Well because it’s an ongoing issue that seems to get worse every time there’s an update. So, assuming everything goes well, stay tuned for the next part of my thoughts on the James Gunn debacle, I’ll be talking more about why his work matters and why he should be rehired. Future posts will also talk about who fired him, who convinced him to fire Gunn, so yeah stay tuned. I can’t promise the next few posts will feel more unique, again a lot of people have talked about this horrible decision, but I hope this andthe future ones encourage more to take a stand and ask Disney to retract this mistake.