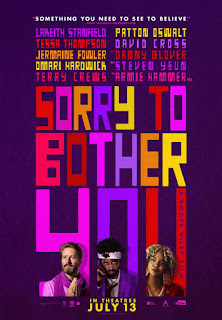 Sorry To Bother You is a film I’ve heard about all Summer, I actually wanted to see it fairly early as the trailer peaked my interest, but life has it’s own way of dealing with these things. So after so long, so much hype and so much secrecy, does it deliver? Yes. This is far and away the craziest movie I’ve seen all year, much like everyone else I’ve listened to, I too will avoid discussing much of this film’s plot, it needs to be experienced. If you thought you had this film figured out based on the trailer, trust me, that’s not all this movie has to offer.

At it’s most basic, the film is about a down on his luck telemarketer named Cassius Green. Green finds a way to succeed once he learns how to hone in on his “white voice”, a technique that is apparently best in making sells. From there we get glimpses of racism, the evils in capitalism and all kinds of crazy ideas that you won’t believe are in the film.

Aside from this being a great movie, what I most often heard surrounding this was talk of it being a movie you can’t have spoiled, I expected plenty from that, but no expectation prepared me for what I got. To be clear, I’m not sure the surprise in the film’s plot works perfectly, but it really doesn’t matter, the film offers an idea and a point, both of which are delivered superbly. I could point out flaws in story threads, like how some don’t really add up to much in the end, but why would I dwell on those? I walked away from the film not just satisfied, but shocked, impressed and with a memorable experience, which is not as common as you might think. This film has it’s ideas and runs with them, some steps are missed, but I was too impressed with the delivery to care about the stumbles.

We get a ton of solid performances throughout this movie, including some nice voiceover performances, but if I have to pick a favorite it’s Tessa Thompson as Detroit, Green’s love interest. This isn’t a knock to the rest of the cast mind you, again I think they’re all solid, from Lakeith Stanfield as Cassius Green, to David Cross as his white voice, to Armie Hammer as the bro-like CEO in the film, all great, but I find myself impressed with Thompson a bit more. Not only is she playing a character that is delightfully weird, but she makes a character that could’ve easily been forgettable in a lesser film,pretty memorable here.

If you’re wondering who the genius is behind this, it’s none other than Boots Riley, a man I’m not too familiar with, but after this I hope he continues bring more art to the big screen. This is a movie that lives on it’s ideas, it thrives, if Riley can do this with one film, I wonder what he can do with more. Admittedly, my first encounter with Riley was when he spoke about his lack of interest in Blackkklansmen, I enjoyed that film, but reading his reaction made me wonder what he offered that was so different? Well having seen this movie I understand. I enjoy both films, but if you asked me which one I loved?  Which one I thought was one of the year’s best? Which one had ideas that stood out far more and needs to be seen and maybe even listened to? It’s Sorry To Bother You.